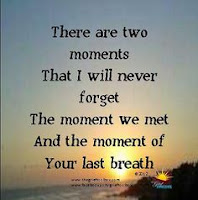 To most people Memorial Day weekend is a time to honor fallen soldiers and still others think of it as the kick off of summer to be celebrated with a mini trip. For many years the holiday, for me, always included helping my husband decorate the graves of his ancestors on one day, seeing family on another day and the third day of the holiday we spent antiquing along Lake Michigan. Since Don died, I’ve been struggling to establish my new normal for the long weekend. My first Memorial Day as a widow was all about Don’s newly installed headstone and the unkempt condition of the grave site. My second Memorial Day was a woe-is-me time of loneliness and misery and I didn’t help myself much by watching back-to-back doomsday movies on TV. My third Memorial Day included a proactive plan to stay busy and stay off Facebook so I didn’t have to hear about other people’s plans. And it helped. This year---year four alone---the holiday weekend snuck up on me. I didn’t have a plan, didn’t have a single thing on my day planner. The cul-de-sac got creepy quiet on Friday when half my neighbors packed up their toys and tents and took off. That was my first clue that a long, lonely holiday was coming. Ohmygod! How would I get through these days without me metaphorically bellowing out “woe is me!” a few times?

Friday I got busy picking up the house even though no one would stop by and pronounce my life in a shambles because my kitchen counter top was loaded up with an assortment of stuff that didn’t belong where I dumped it coming in from the garage. That left Saturday, Sunday and Monday to sit twiddling my thumbs if I didn’t find a way to kick myself in the butt. So Saturday I decided to go to some of the houses on the annual Parade of Homes. Seventy-one houses on the tour and only three were condos. Of those three two were actually advertised as zero steps condos. Better than last year. There was only one. One of the condos I toured was in the perfect location and the other was in the perfect price range. It gave me hope that it will be possible, one day, to find a condo that is a perfect combination of both price and location.

One of the builders has a dozen zero concept condos in various stages of development. But he needs a crash course on what zero steps concept is all about. In his model house the master shower was big enough to fit four wheelchairs but the entry to the shower was only eighteen inches wide which is way too small to be ADA standard which is thirty-six inches. When I pointed that out to the agent, she said a lot of people had mentioned that. Duh! People looking for zero step concept want to age in place. There was no design reason for not doing the shower opening correctly. It even would have cost him less in ceramic tile work and labor.

Saturday I went to the cemetery and had a talk with Don. I told him that I think of him often and that I’m doing okay even though he took a piece of me with him when he left. I cleaned up his headstone which amounted to digging out the sod on all fours sides that have grown over the marble, then I cleaned the stone with water and soap and finally I glued another snoopy trinket in place. By fall it will be gone if past history predicts the future. I don’t bring flowers to plant because the sextons there want you to put them in footed urns that they put on top of the stone for the summer and I refuse to see Don’s name and dates covered up like that. It’s all he has left, for crying out loud!

It was quiet and pretty in the cemetery with all the bright flowers and the flags flapping in a gentle breeze. Although the x-florist in me wanted to rearrange all those terrible silk arrangement that people don't know enough to tweak before plopping them in an urn. Hint: Flower don't grow as straight as an eighteen gauge wire; give those plastic coated wires a bend! As I drove out of the iron gates of the quaint, small town cemetery and past its fieldstone walls, I fell in back of a car that had giant lettering from taillight to taillight that read, “Are you in God’s Hands?” I’m surprised I didn’t have a tailgating collision with the car as I tried to figure out if it was a giant decal or a custom, lettering job. If I’m in God’s hands I wish He would have slapped me silly when I got back home and spent the afternoon power eating my way to just one King’s Hawaiian Sweet Roll short of an epic binge.

Two days of the holiday are down and two more to go. Woo-is-me it’s supposed to rain both days so I won't get my flat of moss roses planted. So now all I have left to do is decide if I'm going to marathon watch the SyFi channel in a heroic effort to avoid setting up my summer eBay station in the garage or try to find the concentration to read one of the gazillion books in my library. Not a good plan but sometimes a widow just has to hang tight and lick her wounds. ©


Posted by Misadventures of Widowhood at 4:39 PM