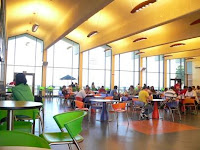 After dropping Levi the Mighty Schnauzer off at the Doggie Foo-Foo Beauty Spa where haircuts cost a dollar short of a fifty dollar bill I had time to kill before my appointment at Bargain Cuts for Humans. Oh, boy, you know what that means! Yup, the Guy Land Cafeteria is located in between the two places and I hadn’t had my breakfast yet.

Did you know you have to have a strategy for picking out a seat in the Guy Land Cafeteria? (So named for all the elderly men who fill up the place in the mornings.) A woman can’t pick a table too close to “guy tables” or she’ll look like a hussy. So I claimed one in the center of the place with lots of empty tables surrounding me. Hey, what better way to test your sex appeal with the geriatric set than to see if an old dude will come long and pick a table next to you, forgoing the prime real estate along the windows that take up three walls of the place?  As I spread orange marmalade on my sour dough toast---did I mention this café is a no dieting zone---a guy with a pot belly eyed me over the top of the sports page and a retreaded stud-muffin ignored me while reading a paperback. Clearly, neither one was impressed with my feminine wiles.

Soon a woman and her teenaged son came into the place and took the table across the aisle from me. I wasn’t going to get any action from them unless she was a lesbian and he was into aging cougars. Not to worry. They took out their cell phones and off they went into their own little worlds---one to Facebook and the other to Candy Crusher. What is it about Candy Crusher that's so mesmerizing? I swear it must send out secret cult messages. Half the world seems to be hooked on it while the other half, like me, is afraid to go there and find out first hand.

I had forgotten to pick up a straw when I went through the cafeteria line so I went back up to the end of the line where I waited as a man was getting his silverware and napkins.

One or two? Okay, it’s been a long time since I’ve decoded guy talk. Was this his way of finding out if I was alone or with someone else? And just as I got puffed up pleased with myself, thinking this old guy was flirting with me I remembered that some people actually need two straws---one for pop and one for water. Dejected, I sat down and eventually I watched as a 50ish year old guy with a lot of hair and a cool swagger came in . Did I mention hair is in short supply at the Guy Land Cafeteria? He took his time making his way to the back of the restaurant stopping at tables here and there to talk to dinners and I thought, oh boy---yes, again. It was an ‘oh boy’ kind of day---Oh boy, someone wearing pants is going to stop at my table and start up a conversation! Image my surprise when he turned out to be the manager on his way back to his office.

By then it was getting closer to noon when the elderly set all seemed to leave in unison to be replaced by the Village People, working class guys in uniforms. Policeman, firemen, construction workers, a couple of biker dudes. The only thing missing was the cowboy and the Indian chief. Sadly, all my food was long gone by then and I wasn’t about to go back up for pie. Though I must confess I thought about it. I was in the mood to goggle men in the prime of their lives. No more breakfast at the Guy Land Cafeteria for me, I decided as I walked out the door. I’m switching to lunch.
After my haircut and a little shopping, I picking Levi back up. He looked better than me. I still have hair hanging in my eyes. Darn hair dresser is still growing out my bangs. I kind of like them though. It feels like I can hide behind my hair and that came in handy with today's adventures in people watching. On the way home I had to I stopped at Starbucks where, on haircut days, Levi expects to be treated to a pup-uccino at the drive-thou window while I get one of their half price happy hour delights. But, darn it, my favorite barista was missing from action. He can always be counted on to flirt with little old ladies. Translation: He’s just a super friendly college kid who likes people and is not afraid to treat woman of all ages exactly the same…just like my husband used to do. <Big sigh.> ©
Posted by Misadventures of Widowhood at 6:34 PM