Day Trips and Secrets from the Past 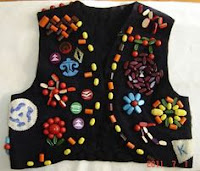 From first grade throughout high school I was in the Birdbirds, Camp Fire Girls and the Horizon Club which have since been expanded into five, renamed groups that now include boys as well as girls. What hasn’t changed---from what I can tell---is the motto and basic purpose of the Camp Fire franchise which is to give kids opportunities to “light the fire within.” I had no choice but to light my fire back in my youth because my mom was a leader. Heck, even my dad got into the act because he built six benches to go around a ping-pong table that our group used in our basement for many years. One of those benches is still in existence at the family cottage, painted red and used as a long coffee table on a screened-in porch. Can you believe it, I also still have my navy blue felt Camp Fire vest with all my colored beads sewn on, and all earned for completed projects. I wish I still had my Camp Fire Trails manual because I’d like to know exactly what I did to earn what looks like close to 200 beads.

What got me thinking about this topic was a day trip I went on this week through the senior hall. It was a restaurant hop in a tourist town on Lake Michigan. Before the bus dropped us off in the shopping district it took us up along the channel headed toward the beach, past the Pronto Pup shack that has been there since I was a kid, past a hillside collection of yard-less cottages where our Horizon Club stayed a week the last summer we were together, before many of us went off to college. The Pronto Pup shack is such an iconic landmark that when it opens early in the spring, it makes the local news where I live, forty miles away. One of my best memories of that week involves my best friend Nancy, me and a pack of candy cigarettes. We thought we were hot stuff as we walked past the Pronto Pup shack pretending we were smoking real cigarettes. Boys were driving by, honking their horns, prompting us to put a little more swing in our hips. We'd find a place to sit on the channel wall so I could sketch boats moving back and forth to the Big Lake and that’s where I discovered what a guy magnet it is to draw in public.

As the senior hall bus took us past the house our Horizon Club rented that summer I had a flashback of my mom swinging a broom and another chaperon swinging a mop as they leaned out of an upstairs windows. They were trying to get a couple of guys off the porch roof. Some of the girls had invited them to come over but our chaperons had other ideas about what proper young ladies in 1960 should be doing with our evenings and that was spelled b-o-a-r-d-g-a-m-e-s, not bedroom games. One night that week Nancy and I pretended to get drunk as we drank glass after glass of chocolate milk and I guess we were pretty convincing because some of the girls actually believed we had spiked the bottle. I don’t think my mom was fooled, though. She’d seen the two of us being silly before, without any milk or alcohol involved.

Now, I’m about to confess something I’ve never told a living (or dead) soul. One night at that cottage I pretended I was having a nightmare behind a locked bedroom door, waking up half the girls in the house. I could hear them talking through the thin walls, heard my mom calling me and finally one of the girls crawled over the wall to unlock the door so my mom could "wake me up." My older brother had a lot of nightmares growing up so I knew just how to act. My folks had taken him to a doctor about his nightmares and were told they were caused by him being too active before bedtime, which probably explains why my mom never questioned why I was having one out of the blue. Nancy, who was in the other bed in the same room, slept through the whole thing. I wonder if she still sleeps like a rock.

Back to 2016: The restaurant hops work like this: The bus drops us off at one end of the main drag of a tourist town and at appointed times we meet up three times, in three different restaurants along that street, broken up with shopping in between courses. We pick out our menu choices when we pay for our RSVPs so we don’t waste time ordering or paying but it’s more than enough time to soak up the ambiance of first class places. I had a Tai crunch salad with peanut sauce dressing in one place, a beer brew hamburger with bacon jam, a fried egg and haystack onions on it at another place and for the dessert round, I had an ice cream brownie sundae. (Michigan has gone micro beer crazy. We can even get ice cream with beer though mine, that day, was caramel infused.) I’m not a big fan of shopping so in between the entree and dessert I sat on a park bench soaking up sunshine, enjoying the clean breeze coming off Lake Michigan and remembering that week spent at the beach fifty-six years ago when I took my carefree and easy life for granted. But carefree and easy would not last forever. The turmoil of the '60s was a building drumbeat that would leave a dark and lasting stain on my life. ©

P.S. That's not my vest in the photo above but it's very much like mine. Mine is buried in a box and I'm too lazy to dig it out to photograph it.
Posted by Misadventures of Widowhood at 12:30 AM

New comments are not allowed.