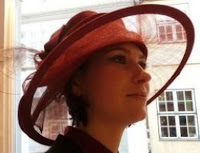 The first and third Wednesdays of the month are Red Hat Society teas or walk-abouts. I’ve been to zero meetings over the winter. Some events I missed because the roads were bad or the temperatures were too low. I’m choosy about venturing out of the house in the winters. Some would call me a chicken others might say I’m pragmatic. Other times I didn’t go because I was sick and didn’t want to spread my yuckies around. I do get the minutes to all the meetings via e-mail, so I keep up to speed. This week I decided I’d better go before the other ladies forget what I look like, otherwise I might as well drop my membership.

In January I did try to go to a tea but I showed up on the wrong Wednesday and this Wednesday I showed up an hour early. No, I’m not getting old. Stop saying that! Normally being early would not be a problem because I always have a mini notebook and pen in my purse that I use in my struggling writer impersonations. But my 3 ½ by 4 ½ inches notebook only had ten pages left in it. I was panicked stricken. I don’t write well under the pressure of knowing I don’t have room for mistakes and revisions. So I decided to make a list of the pros and cons of dropping out of the Red Hat Society.

Pro #1: There is another writer in the group who I enjoy talking with. She’s a thousand times more talented than I am but I’m more prolific and disciplined than she is. We been known to inspire each other and we do that on Facebook. But face-to-face time is…well, face-to-face time---different and I like the fluidity of our conversations no matter the topic.

Con #1: Since changing leadership (which has only happened once in twelve years and not likely to change again anytime soon) I rarely want to do the walk-abouts that are planned because most of them are religion related. Case in point: In April they are going to a play called, The Old Rugged Cross which is billed as an event to “bring peace and gets you a little closer to the Holy Spirit.” It takes place several hours out of town and setting aside the forty dollar price tag, being an agnostic the conversation riding home would probably give me a headache and my tongue would be raw from biting it. The writer is the only one in the group who knows how I feel about religion. And I respect her right to believe in the teachings of her church which tells her I’m going to hell in a hand-basket. No brownie points for being a moral person, a person who lives a principled life.

Pro #2: I’m sentimental over the concept of the Red Hat Society and how it helped me through a hard point in my life. I was a charter member of the group (along with the writer) and it was started in the second year after my husband’s stroke. The group was my only contact with a life outside of his therapies and other caregiver chores. Back then we had a waiting list to get in the group, and the walk-abouts got to the point that they were all-day or even weekend events that I couldn’t manage while taking care of Don. It broke my heart when I dropped out but it wasn’t fair to hold a place when I wasn’t fully taking part in the activities. After Don died, I had the opportunity to drop back into the group but in the years in between whenever life would get tough I’d hold on to the mindset, “When I am an old woman I shall wear purple with a red hat that doesn't go, and doesn't suit me…” which just means Red Hat Society women are freeing themselves to have fun with no regard for what society dictates as proper decorum for women of a certain age. We did our duties to our families and communities and red hat time is all about well-deserved play times and me-first times.

Con #2: Like I said, I’m sentimental about the mission statement of the Red Hat Society but the dynamics of our chapter has changed over the years and I find myself going through the motions when I go to a tea. I’m not close with any of the women. They’re all nice but many have known each other since grade school and they have their small town church families in common as well. My gathering girls group gives me the same feeling of inclusion, fun and laughter that I used to enjoy back when my husband was still alive and I’d go to the newly minted Red Hat Society events.

They say you can never have too many friends, and making them and keeping them is not something I take lightly. Still, life is short and I’m getting too old to just be going through the motions of doing anything that my heart isn’t fully committed to doing. And that is my Red Hat Society dilemma. ©

Posted by Misadventures of Widowhood at 12:26 AM