Old Man with a Gun, Old Women with Pie 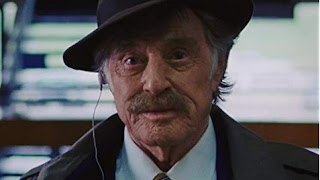 Is there any woman over seventy who didn’t at one time in her life have a crush on Robert Redford? Fest up, I can’t be the only one. Heck, even my husband had a crush on him since the days of Redford playing the ‘Kid’ in Butch Cassidy and the Sundance Kid. Since that film was released in 1969 I must have seen it thirty times and I regret that I didn’t think to play our VCR tape for Don in his post stroke years. Anyway, Monday two of my Gathering Girls pals and I went to see The Old Man with a Gun, Redford’s newest flick. If you happen to see it, watch for a line where his character says he’s never ridden a horse. The close up of his twinkling eyes, according to one reviewer, is supposed to be an insiders’ joke to those of us who remember that wild horse ride Butch and The Kid took that ended with them going over a high cliff, plunging down into a river below and Paul Newman asking Robert Redford if he can swim as they were falling.

Imdb.com sums up the storyline of The Old Man with a Gun like this: “Based on the true story of Forrest Tucker (Robert Redford), from his audacious escape from San Quentin at the age of 70 to an unprecedented string of heists that confounded authorities and enchanted the public. Wrapped up in the pursuit are detective John Hunt (Casey Affleck), who becomes captivated with Forrest's commitment to his craft, and a woman (Sissy Spacek), who loves him in spite of his chosen profession.” I must say Redford (82) looked a tad too old to be playing a 70 year old man. It's pretty obvious he hasn't spent a lot of time in surgeon's offices getting vanity procedures and I admire that in Hollywood stars. But when I get as wrinkled as he is in the photo up above I'll be sleeping with a Preparation H face mask.

The review at RogerEbert.com calls The Old Man with a Gun “a love letter to a cinematic legend, serving as a perfect final film for someone who long ago surpassed mere actor status to become an icon.” At his age I guess Redford’s got the right to claim this will be his last movie. He doesn’t need to work to keep the wolves from his door and he’s always had a knack for picking films that fit his acting range and personality. Seven of his movies are on my list of 50 favorite films: All the President’s Men, Out of Africa, The Natural, Butch Cassidy and the Sundance Kid, The Way we Were and two movies that Redford directed: The Legend of Bagger Vance, starring Will Smith and Matt Damon and A River Runs Through it starring a young Brad Pitt. These last two are among my top five favorite movies of all time.

One of the Gathering Girls who didn’t go with us to see the movie saw it earlier and she didn’t like it. She thought it dragged too much but all the professional reviewers pretty much agreed that it was a 4 or 4 ½ star film. The three of us who went this week could see why B.L. thought it dragged but we all loved it despite this flaw in the last third. Not LOVE, loved it but more like a 'strong like' that made us glad we went. Redford often plays understated and subtle characters and this was that kind of role. The New York Times reviewer hinted along those lines when he wrote: “If you work a bit, you can persuade yourself of hidden depths and metaphysical sorrows. Mr. Affleck is so melancholy. Mr. Redford is so blithe. Surely the contrast in their temperaments means something.”

It’s a movie that wants you to believe the robberies weren’t done for the money but rather for the fun of doing them. The man whose life the movie was based on had robbed dozens of banks and broke out of prison 16 times. His life of crime was set at an early age when he escaped from an orphanage a couple of times. And two of my favorite lines in the movie went something like this: “Ten year old kids have hopes and dreams but they don’t understand time like you do when you’re old” and “You go along thinking you’re happy until you wake up one day and you’re not.”

If this truly is Redford’s last movie I'm glad I came full circle with him. Also, if we want Hollywood to keep making movies for an older audience, we have to support them at the box office. But the best part of going to the movie was the fact that the three of us met up with two other Gathering Girls afterwards for dessert, and over pie and coffee we laughed so hard that our sides hurt. We have such good chemistry together and I often wonder if we had met when we were younger if we’d have bonded like we are doing now. Probably not. It’s like the line from the movie about understanding that hopes and dreams get lost or edited as we come to understand the passing of time. Younger people tend to take friendships for granted and let them simmer on a back burner while pursuing individual dreams, but meeting as septuagenarians and octogenarians we've had to cut to the chase. We're totally in the moment when we’re together, knowing a health issue could take any one of us out of the game tomorrow. ©

Post script: If you don't have time or desire to leave a comment please consider checking one of the 'reaction' squares directly below.
Posted by Misadventures of Widowhood at 12:21 AM