The Music that Went to War 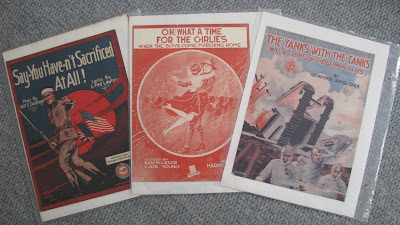 Over the weekend I dug out my husband’s album of turn-of-the-century sheet music and divided it up into three lots to sell on e-Bay---one of Black Americana, one of WWI songs and another of popular-at-the-time music. One hundred and ten sheets and the largest lot by far was the WWI lot. I'd forgotten that we had over sixty pieces of music that had been written about the war and the mothers and sweethearts waiting on the home front. The titles alone tell a story: Will you be one of the Soldier Boys, I don’t Know Where I’m Going but I’m on my Way, I’ll Return Mother Darling, I’m Hitting the Trail for Normandy so Kiss me Goodbye, It’s a Long way to Berlin but We’ll get There, The Yanks with the Tanks will go Through the German Ranks, They are Tenting Tonight in Far off France, Three Wonderful Letters from Home, I Know They are Waiting for Me, Don’t try to Steal the Sweetheart of a Soldier, He was a Soldier from the U.S.A., There’s a Service Flag Flying at our House, Oh What a Time for the Girlies When the Boys come Marching Home, and my personally favorite They were all out of Step but Jim.

Decades ago sheet music was collected mostly for the great graphics on the covers but they have fallen far out of favor. The values of antiques and collectibles are more fluid than many people realize but a good rule of thumb is this: Most people collect in the era that their grandparents lived during the prime of their lives and pickers need to keep that in mind if they are buying for resale. As the population ages and they start downsizing a younger crop of collectors comes along to turn another decade of old things into hot commodities like Mid-Century stuff is right now. Stuff at the top of the market only stays at the top for so long before the prices start falling. There are exceptions with longer or no windows of popularity, of course, baseball card collecting being one of them and Black memorabilia another. Of the latter, I’ve read there are two types of people who collect Black Americana: Some buy it to destroy the postcards, advertisements, nicnacks, etc., that show things like black children eating watermelons or being fed to alligators while the other set of buyers are setting up personal or public museums of black stereotyped memorabilia. Ferris State University has a Jim Crow Museum of Racist Memorabilia that tells a shocking-to-some story to those who are willing to listen and learn.

I’ll be lucky to find buyers for the sheet music who will pay more than seventy-five cents a sheet, sold in lots. If I were to e-Bay each one separately I still couldn’t get more than $3 to $12 each for the noteworthy ones but about a third would probably go unsold. Not that it matters because we didn’t have a penny invested---the music belonged to my husband’s mother. She taught piano lessons before she was married in 1918 and her maiden name is written on most of the music. Not a single piece has her married name inscribed and I found that kind of sad. She obviously loved playing. I can picture the quiet, unassuming woman I knew sitting at an upright piano letting her inner spirit out while pounding the keys to Strike up the Band Here Comes a Sailor.

I thought about offering the music on Facebook to my husband’s family like I did with the hand embroidery pieces my mom made, and I may still do that with the smallest lot of "popular" music. But Don has a lot of nieces and nephews and I’d end up mailing the sheet music all over the place. If only ten of them, for example, wanted 2-3 sheets it would run me $70 in postage, backer boards and envelopes, not to mention it would be time consuming. Plus Don’s brothers, their wives and the older nieces and nephews all got to go through the family home after his mother died and took whatever they wanted. No one wanted that sheet music back then. Someone might ask why I don’t just throw it all in the trash and save myself the trouble. I can’t do that with things that have been lovingly saved for a hundred years. One way or another the sheet music will get adopted or sold.

I always thought that my husband could play the piano by ear but now I wonder if when he was a little boy that he might have gotten some lessons from his mom. I never heard any stories of the family standing around the piano singing and her sheet music buying seemed to have dropped right off in 1918. I’m guessing her teaching opportunities dried up when she moved to the country after getting married. And it didn’t take long before life got too hard to allow much time for music, her being a farmer’s wife with four boys and a couple of hire hands to feed and do laundry for. She also kept a garden, canned for winter, raised chickens and walked several miles into town each day to sell eggs to a local grocery store.

I went through the sheet music several times looking for a cover that would look good with the color scheme I’ll be using when I move, thinking I could frame it in honor of my mother-in-law. I couldn’t find one but I’m keeping, Yes, There are no Bananas just in case I can find a place for it in the kitchen. I remember singing that song when I was a kid and the cover art reminds me of my Italian heritage for some crazy reason I can't figure out, even though the grocer who couldn’t say ‘no’ to any question was Greek. © 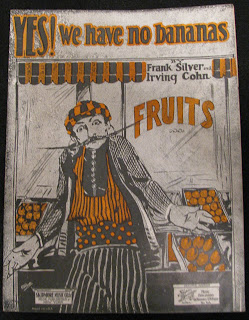