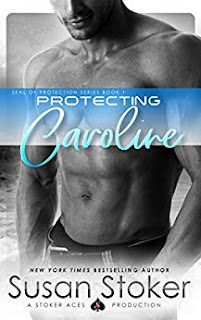 I’ve been such a good little worker bee for so long I guess I shouldn’t be surprised that I went off the rails. Yup, I’ve been binge reading again. And late into the night, dragging myself out of bed with only five hours of sleep just to pick up my Kindle again to polish of a few more chapters before breakfast. Four days, seven books downloaded and read and I don’t want to stop. What bothers me more than binge reading is the type of books I’m reading and I’m a little embarrassed to admit I’ve gotten caught up in Susan Stoker’s Navy SEAL books. I’ve never been a fan of military themed books and movies and her fiction seems to be a cross between action-adventure and romances but she labels her writing: contemporary romantic suspense. Unfortunately for me, Susan is a prolific writer. Since her first book debuted in 2014 she’s written over 60 and at the rate I’m going I’ll be dead from sleep-deprivation if I keep downloading a new one within minutes of finishing another. (I should examine why I'm avoiding my 'real life' by binge reading...but time for that in another post.)

If you google Susan Stoker you’ll find the following paragraph all over the place: “Susan Stoker is a New York Times, USA Today, and Wall Street Journal bestselling author whose series include Ace Security, Badge of Honor: Texas Heroes, SEAL of Protection, Unsung Heroes: Delta Force, and Mountain Mercenaries. Married to a retired army noncommissioned officer, Stoker has lived all over the country—from Missouri to California to Colorado to Texas—and currently lives under the big skies of Tennessee. A true believer in happily ever after, Stoker enjoys writing novels in which romance turns to love.”

I’m a little old lady---well, two out of three of those words are true---I’m old and a lady and a worry-wart who can’t even go across town without leaving a note behind in case I come up missing. I also don’t drive after dark and I have an irrational fear of dying under water in a submerged car. So why am I fascinated by the kick-ass and survival skills navy SEALs have? The only thing I have in common with any of Susan’s male protagonists is the cargo pants they wear. Let me explain. One of Susan's female protagonists called her guy’s cargo pants ‘magic pants’ because of all the life-saving stuff that he could product when needed. I don’t have ‘magic pants’ but I've been known to carry a magic purse. I once went on a day trip sponsored by the senior hall and was aghast that the woman next to me on the bus only brought with her a debit card in her jeans pocket. But guess who could produce a Kleenex, cough drop, safety pin and an aspirin when others near-by needed them. Now I’m lusting after a pair of those cargo pants to go with the cinematographer’s field vest with a million pockets that I’ve lusted after for twenty years. Wouldn’t it be fun to pack all those pockets up with essentials? If I had magic pants one of my fast-draw, bellowed flap pockets would be filled with raspberry chocolate truffles in a water tight box. If I’m going down to the bottom of the river, I’d want chocolate.

I used to read a ton of historical romance books back in the ‘80s and ‘90s and I credit them fondly for me FINALLY finding the joy of reading after struggling with mild dyslexia for the first 40 something years of my life. They also got me interested in woman’s history. I’d read something in a romance and not believe it was based on actual events like the authors claimed. Back then I didn’t google like I do now but I sure made plenty of trips to the library to research historical details until I learned which romance authors could be trusted for her accuracy. I don’t have much frame of reference for Susan Stoker’s accuracy but my instincts tell me her depiction of the military rings true.

Another thing I find fascinating about Stoker’s book is how differently she handles sex and love scenes from the historical romance genre books I read in decades past. No more Rhett Butters throwing women over their shoulders aka taming the “wildcat" plots so to speak. Stoker’s guys are asking are-you-sure-you-want-this sort of questions and talking birth control. One of her older characters even told a young woman she’d have to make the first move because in this day and age guys had to be careful not to put pressure on a woman lest he be accused of sexual harassment. That's not to say that Stoker's men are not Alpha types. They are and a few of them were not all that likeable in bed. (Did I just type that?) And while Stoker is writing genre fiction, they are not what I'd call hardcore formula. Case in point: after finishing one book, I realized it didn't have a "hot and heavy" sex scene like the one I read before it, and another SEAL book had a few too many crude details for my tastes.

Susan also writes some of the best cliffhangers I've ever read. She might as well not even format chapters in her books because I’ve been blowing right past the intended pauses. And like a lot of books marketed in the historical romance section, her contemporaries seem to have the classic damsel-in-distress element with a modern twist of the damsels saving the guys a few times, but I've been enjoying the action-adventure side of the equation almost more than the romance which led me to wonder whose reads Stoker. I could see some men liking them. I googled and found a Susan Stoker fan page on Facebook and read some of the posts and comments. Didn’t find any guy-fans but there were some military wives. Duh, why didn’t think of that?

I will get back to my real life by Monday. I have to! I have places to go and things to do---one of them very exciting and the other just plain fun assuming I don't get snowed in. If I do I'm going to call in the SEALS. I'll bet they'd have folding snow shovels in their magic pants.   ©
Posted by Misadventures of Widowhood at 12:30 AM