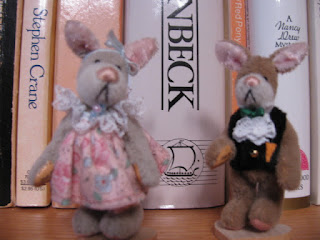 I finally quit sucking my thumb, put down my security blanket and tackled the job of downsizing my craft room and its closet full of handcrafts. And by the time I was finished the trunk of my car was stuffed with an assortment of goodies to take to Goodwill plus I had two bags of junk that went in my trash cart and some other things set aside for the auction house. Last summer when I downsizing my painting supplies in that room it was easy to decide what goes and what stays. I figured I’d only have room to work in one medium and everything else had to go. I picked acrylics to keep even though I prefer working in oils because I won’t have a garage for clean ups after I move. I never liked water colors and pastels are too messy for living smaller so those were both easy to give away. I live for logical choices like that. The crafts closet, however, was a different can of worms.

Apparently, that metaphorical thumbing sucking had sucked all the wisdom in my head out in the open and gave me the clarity I needed to get the dreaded contents of the handcrafts closet downsized. I decided I can live without making full-sized quilts and clothing or dolls anymore. But I do want to keep quilting and sewing so I'll be switching to smaller projects. After that decision was made my purging plan fell into place. I trashed an entire garbage bag full of patterns and only keep two---one for tote bags and hats, another for toaster covers and placemats. I went through two dozen quilting books and whittled those in half, saving the ones with small gift-giving projects. The place I’m moving to does an annual arts and crafts show where residents exhibit and sell for charity. I’m going to jump on that bandwagon. So I kept my quilting quarters, and split the yarn I had stockpiled in half with Goodwill getting all the dark colors. I’m going to be the light-and-airy-colors knitter from now on because the dark colors are too hard on my eyes. Yes, logic always works for me if I give it enough time to present its case.

In the closet I found two, full sized quilt tops nearly finished---an hour of sewing would probably complete them both, but then what? The colors were all wrong for my future home so I packed them up in large, clear zip lock bags along with the remaining material and patterns effectively making kits out of them to donate to Goodwill. I did the same with four Raggedy Ann and Andy dolls that were nearly done. Then I tackled yard goods. I had enough flannel to make the von Trapp family all night gowns. I also had yards of Pendleton wools, cottons and silk. I used to be a good seamstress and I also found my tailoring book from the classes I took back in college. I put all the yard goods in a Goodwill box and kept the book. Not that I plan to make suits, blouses and lingerie again---I even sold my sewing machine with all the bells and whistles because it was too heavy for me to lift, with plans to buy a small, no frills machine around Mother's Day. I kept the book because I don’t want to forget who I was back when I could do tailoring with the best of them. Yes, me the lady who now dresses one notch above a bag lady.

I had the hardest time deciding to let go of my teddy bear making supplies. Last summer I put all my fancy furs and stuffing that took up a lot of space in an auction and I kept the patterns, joints, tools, threads and eyes. And as I was sitting and staring into my craft closet I had a stern talk with myself, finally admitted that I’ll probably never make another artisan bear so why was I keeping the last two boxes of supplies? No answers came but I wasn't ready to let go. The bear supplies boxes got marked with an orange dot labels and put back in the closet. I use green dots on things that are getting moved with me. Orange dots mean I will revisit the choices closer to my move. Then on the last day of my closet project I took those bear boxes back out off the shelf, repacked the stuff in one large cardboard box to send off the auction house minus a shoe box full of bear supplies and patterns for making three/four inches mini bears like the ones photographed above. (My favorites.) Yes, I know, that's a totally illogical choice to make because I don’t have the finger dexterity or eyesight to make those tiny guys anymore. But that plastic shoe box now proudly sports a green dot. It’s like the tailoring book, the bear box is a memory place card of sorts.

It took me four days to sort and reorganize my crafts but I was thumb sucking longer than I was actually working. I’m pretty sure I kept more than I’ll ever use but then again I’ll have a lot more free time after I’ve moved and hopefully ten years left to use it all. Other than walking the dog I won’t have any responsibilities or work inside or outside of the house to do, and no cooking unless I want to. I worry that I'll feel like a large piece of me is missing. So much of how I define who I am is based on what I've done in the past and what I dream about doing in the future. How much can I let go of and still be me? And I'm not just talking about letting go of stuff but also in terms of letting go responsibilities... ©
Posted by Misadventures of Widowhood at 12:30 AM