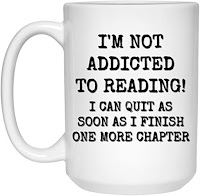 I finally did it. I got my fill of reading military/action adventure romances. Yes, I know I said that once before but I had a relapse. I didn’t mean to do it, I swear. And you don’t have to tell me that I should be using my reading time to improve my mind, not giving my fantasies fodder that make me feel young and kick-ass strong again. But it was late at night and I couldn’t sleep and there was my Kindle begging me to download some testosterone-on-steroids to kick the pandemic worries out of my brain. One book later I left author Susan Stoker in the dust and for good this time, after being turned off by a third book of hers that was treating S&M like its normal. It’s not, ladies and gentlemen. It’s just not! I think she was trying to ride the Fifty Shades of Grey train back when that was ‘the thing’ and while my ultra-ego might like alpha males I want my alpha males to have a code of honor that does not include physical or mental abuse no matter how much the "little woman" claims to like it. If I could, I'd lock the Christian Greys of the world up in one iron cage and throw away the key. Okay, they might like that, so I’ll need to re-think that idea if I ever get put in charge of the world. Maybe a bullet in the head would be better. Ohmygod, am I turning into a blood-thirsty bitch or what!

But I do need to thank Susan Stoker for leading me to Pippa Grant. Apparently there is a trend in genre fiction marketing these days where 2-3 authors promote each other by using the same characters. A secondary character in, say, Susan’s book will appear as a main character in Pippa Grant's book. And all the authors work their way through a group of men who share the same careers to intro-connect their stories. Susan is into Navy Seals and Delta Forces, Pippa is into former boy bands and pro hockey and baseball players. The biggest difference between these two authors, though, is Pippa’s books are billed as ‘romantic comedies’ and I was hooked on her writing style from the first one I read, America’s Geekheart, which had me laughing out loud at 3:00 in the morning, pandemic stress be damned. I’ve since read four more of her books but that’s still my favorite. I’m going to sound like a guy who claims he only subscribed to Playboy for the articles when I say this but I’m only reading Pippa for the humor. Her 'players'---and I don’t mean sports here---are the naked photos I overlook. Well, as much as anyone could ignore the stud muffins in romance books. But believe me when I say this in my best Scarlett O’Hara voice, “As God is my witness when this pandemic is over I will finally finish reading Tolstoy’s War and Peace.” Ya, it really is on my Kindle and I'm planning on reading it to the very last page before I die. Don't let anyone tell you I don't have lofty goals.

Okay, only 427 more words to write to fulfill my minimum, by-weekly quota. It’s hard to come up with things to write about when stay-at-home orders are still in effect and I’m not doing anything but sorting out my past life through e-Bay sales. No doubt I’ll write about that topic again---after all my blog is my diary. But for now I’m bored by that topic so I’ll opine about the other big event in my life. Yes, the ghost in the house who likes to look inside the refrigerator and leave the door standing open. If you’re thinking I’m just getting old and forgetting to shut the door myself after all those pandemic grazing trips I make inside my Whirlpool, I thought the same thing the first couple of times I found the door standing up. On closer examination I figured out that along with the ghost theory there’s the other theory that the seal is wearing out.

In my heydays of being a Spoiled Woman I could have just told---aka nagged---my dad or husband about the problem and like black magic they’d one day produce a new seal and repair the appliance. There wasn’t a single thing inside or outside of a house they couldn’t fix. And now days I bet I wouldn't even be able to find someone to replace a refrigerator seal. Darn! I. Do. Not. Want. To. Buy a new, expensive appliance when I don’t plan to stay in this house. So far, I’ve avoided using Duck Tape to keep the door from swinging open on its own, but I might buy a white roll to have on hand just in case it comes to that. Every woman needs Duck Tape and bungee cords in her tool box. They can temporarily fix anything and isn’t it nice that they come in colors, now, so you don’t have to be like Frazier’s father with his silver-on-green, taped-up La-Z-Boy in his son's fancy-ass penthouse living room. I loved that TV show back in its day.

Ninety-nine words to go and I think I’ll use them by writing about the show of testosterone on my deck railing this week in the form of a pair of breeding mourning dove and a robin who seemed to think he should get in on the action. Yes, you read that right. A plump robin, an uncooperative dove with lady parts and male dove who seemed to up to the task of protecting her honor. In all the years the doves have been hanging around my deck rail and a near-by pine tree where they build their nest, this is the first time I’ve seen an attempt throw off the balance of the species. Mother Nature is off her meds again! ©
Posted by Misadventures of Widowhood at 12:30 AM