Downsizing during the Pandemic 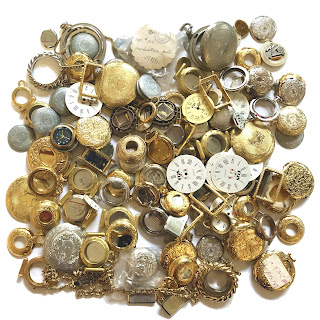 It’s been a long time since I’ve done an e-Bay downsizing post which is crazy considering since the pandemic started that’s all I’ve been doing that could be considered productive. I’m still listing 12 to 15 collectibles a week but my heart isn’t in it and it’s entered my mind more than once to question why I’m getting rid of all this stuff when my plans for the future are subject to the whims of the pandemic. If I can't move out, I will not like living in a vanilla house void of all the stuff that gave/gives it personality. Heavy construction in Michigan is still on hold due to our stay-at-home orders which means the continuum care campus can’t possibly be ready by the original move-in date of early spring 2021.

I’m still making decent money playing the e-bay game. Not as good perhaps as before the pandemic but I can’t tell if it’s because there are less bidders or I’m selling lesser quality goods right now---probably a little of both. I think I’ve mentioned in the past that I had a love/hate relationship with my husband’s lighter collection and I only have one out of the 400 left to sell and I'm dragging my feet to list it. I’m not sure exactly how much I've made off that collection but I’m guessing it's just shy of $13,000. I miss the big bucks the Mid-East and Far-East collectors were dishing out for those Zippos but I’m on to other things. I just sold a lot of three broken fountain pens for $148. Twenty more to go that aren’t broken and they’ll be history too.

I’ve been doing a lot of binge reading and, yes, I’m still stuck on military romantic action adventures. I never should have signed up for Kindle Unlimited. I’ve been borrowing three books a week. Along with that waste of time I’m also spending too many hours in front of a computer screen. It’s not what I had scheduled on my long-range plans for moving into the CCC and I hate that I have no idea when and if I can get back to my master plan. I was supposed to be selling off furniture pieces on Facebook’s Marketplace this month but that’s been closed down because of the stay-at-home orders and there is no word when that will open back up. How do you sell stuff like that if you can’t advertise it? We can’t even donate to Goodwill, the Salvation Army or the library right now. Or take things to recycling or hazardous waste. Although I heard recycling is opening back up on Monday.
I’m such a one track person. I could be going through drawers, cupboards and closets to pull stuff out to donate but I didn’t want to do that kind of stuff until next winter and just to have it pile up in the garage doesn’t appeal to me when mice or crawling things could mistake the bags and boxes for welcome mats. So now I’m working on researching pocket watches to sell on e-Bay. Pocket watches are so pretty but they aren’t worth much, in fact they’re a tough thing to sell unless you want to take them down to your local gold and silver buyer and that idea is way down on my Plan E. Plan E would be the quickest and easiest way to get rid of a dozen and a half pocket watches but like when I sold the collection sheet music from WW I, I’m willing to work my butt off to try to find others who will appreciate the artistry that went into pocket watches made in the late 1800s. It breaks my heart when I go into up-cycling shop and see stuff made out of dozens of old watch faces, knowing their beautiful cases had been stripped away and sold to melt down.

I do have one pocket watch that is giving me a serious dilemma, the kind that makes you question your entire value system. It came down through my husband’s family and believe it or not president Trump is keeping me from passing it on to my husband’s nephew. After Don died I gave his three nephews other family mementos---a shot gun that had been in the family since the Civil War, expensive lighters---they all smoke---art prints, a pocket knife, etc. I would have given away the watch away back then, too, if I had remembered it. Nieces were given vases that were their grandmothers. Hated parting with them, I did. I also gave my husband’s brother things that came from their mother including her 1907 school uniform and graduation announcement. Oh, and four large square stones that came from the foundation of the old family farmhouse after a tornado destroyed the place. We’d moved those heavy things several times and his brother is just as sentimental over them as Don was. His brother took the stones to their summer cottage up north to sit on around a fire pit and to let his four grandkids grow their own sentimental attachments to them and that makes me happy.

The point is before Trump came along I would have happily passed that pocket watch on. But after being called naïve, brain dead, stupid, a media sheep and other choice things that Trump fans like to throw at liberal democrats like me it's hard to feel generous toward the nephew and his wife who did the name calling---or I should say typed the derogatory words on Facebook for everyone to see. The nephew shares the same first and last name of four generations of first born men in my husband's family and the watch belonged to one of his namesakes. (Don got the pocket watch when family heirlooms were divided between him and his brothers. He was third to pick in the first round of picking.) I tagged the watch with its history, put it in with his other pocket watches and I forgot all about it until this week.) One day my sense of doing the right thing may rise above my hurt feelings and disgust and I'll give the watch to the nephew, but I'm not there now yet. But after the Trump administration is left behind in the pages of history maybe I'll get there. Maybe not. Maybe this situation is a good example of how pocket watch cases get separated from their guts and sold for scrap metal. ©
Posted by Misadventures of Widowhood at 12:30 AM