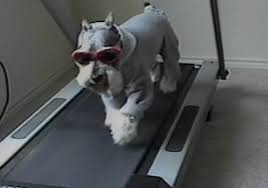 It’s official. The dog lost two pounds since his last yearly physical and the vet wants him to loss two more. “Ideally,” she said. “At his age,” she said. She questioned me up one side and down the other about what I’m feeding him, how much exercise he’s getting to the point I wanted to scream, Get a life, Lady! He’s fat, I’m fat and we know which one of us buys the groceries in the family. I wanted to tell her that if I was only two pounds overweight I’d be running naked up and down the sidewalk…which come to think about is exactly what Levi does. Everywhere that dogs goes, people praise him for his handsome, good looks and fine manners. Maybe it’s a schnauzer thing but he’s got attitude with a capital A which is probably why no one but the vet has ever fat shamed him.

All this cause and effect between eating too much and moving too little was discussed over my cell phone while I sat in the clinic’s parking lot and they had him kidnapped inside where they drew his blood and felt him up for lumps and bumps. Pandemic rules of engagement. After $215 worth of examination that included two canine flu shots, a fecal exam looking for worms of various descriptions they didn’t find and a CBC blood chemistry test and they finally brought him back out to car. Can you believe it, they charged $3.95 to throw out the inch long sample of poop after playing with it under a microscope. I should have asked for it back and used the $3.95 down the street at Starbucks.

You will never guess in a hundred years what I’m reading right now. No, Not War and Peace. I’m reading a book titled Pandemic by A.G. Riddle, as if I don’t get enough scary data off the nightly news. 722 pages that were written in 2017 and its blurb describes the novel as “a groundbreaking sci-fi thriller that takes you inside the CDC and WHO response to a global outbreak. It's an eye-opening journey that will change everything you think you know about pandemics--and how to survive one. The product of over two years of research, Pandemic is filled with real science and history--and more than enough twists to keep you up late into the night, promising, ‘just one more chapter.’" The Guardian reviewer wrote, it "...reads like a superior collaboration between Dan Brown [The De Vinci Code] and Michael Crichton [The Andromeda Strain]." Oh! My! God! I’ve ready both these authors and is that statement ever true.

I’m just past the half way point in the book and already I’m flabbergasted that our president bad-mouths the CDC and WHO and wants to defund them. The kind of work they do to contain viruses around the world blows my mind. Dangerous work done by super-smart and highly educated people, I might add. The most dangerous thing Trump has ever done is stick his penis where it doesn’t belong without wearing a condom. I’m sorry, I should compartmentalize my politics and not let them contaminate my book review.

So, how about those Yankees? The urban dictionary says that phrase is used to break up incredibly awkward silences, presumably the kind of silence that follows when someone says something mean about the president’s penis. Did it work? Are you now thinking about baseball and how cute some of those players look in their uniforms? I don’t follow sports so I don’t even know if the baseball season was canceled or not because of the pandemic. And once again, I’m sorry. I shouldn’t be sexualizing the players by making your mind’s eye check out the players’ abs, tushes or 'bumps' in the front.

I’ve been trying remember what we label the action where you hold your hands in front of your eyes with two fingers on each hand forming V-shapes, then you slowly draw your hands off to the sides. I think it’s meant to show you clearing your head of all its wayward thoughts and are ready to party. I don’t know if that’s true but either way picture me doing that right now because it’s time to change topics. But, darn it, it bothers me when I have a picture like that stuck in my brain and I can’t figure out how to google it for an explanation, but a goofy movie with Woody Allen keeps playing with my thoughts. (If you’re getting the idea that I’m filibustering my own blog post to get my word count in, you’d be right.)

Let’s get serious here for a minute. The dog isn’t the only one with a doctor who is wanting a change in eating habits. When my blood tests came back in preparation for my Reclast infusion, they showed my blood sugars were elevated—duh, pandemic comfort foods did that to me. And the doctor had me run a second test---an A1C test that shows your blood sugar levels over a three month period. For the first time in my life, I’m dangerously close to being labeled ‘diabetic.’ I’m at 5.7% and 6.5% is where they slap that label on your patient file. I told the doctor, “No way! Give me a couple of months and I’ll lower that percentage.” So now not only are we still living in Pandemic Park I have to do it with the added stress of having to trade my comfort foods in for healthy stuff while listening to dog complain when he doesn’t get all the comfort treats. Trust me when I say that he doesn’t suffer in silence. And guess what, neither do I and aren't you glad you're not my neighbor. ©