Extra, Extra! My Holiday Trip Back to the Future 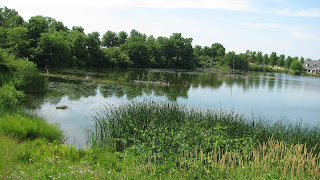 This is an extra edition post because if I put it in my scheduler you'd be reading it on July 15th and who wants to read about a 4th of July trip two weeks later. Okay, it wasn’t a huge, all day 4th of July party/trip to my in-laws on a lake like I’ve gone to the same number of times as I have fingers and toes on my aging body. It wasn’t a camping trip like my husband and I loved doing where we’d set up a tent at a state park along Lake Michigan and wake up the morning of the fourth to the sound of waves slapping the sand. It wasn’t even a day trip like when we’d throw the dog in the back of our old Corvette and head for the highway that would take us along the western shore of Lake Michigan, the tee-tops off, the wind whipping through our hair, the air conditioner trying to compensate for the sun overhead. But this year I did take a mini trip that helped to put a little pep in my step, a little giddy-up in my go.

Enough of the teaser, intro-to-the-subject sentences, time for me to spill the beans. (Jeez, it's going to be a clichés and idioms writing day, isn't it). On the spur-of-moment on the 4th of July I decided that the traffic would be light and it was good time to go down to check on the progress at the continuum care complex where I’ve got money down on an independent living unit. I hadn’t been there since the ground breaking that took place not long before the pandemic forced them to quit working for four months.

I got a bug in my undies---notice how I changed that cliché just enough to keep the writing police off my back? Anyway, I got the bug in bonnet---oops, bug in my undies that I wanted to find out what direction my unit’s windows will face and I heard on the grapevine that the footprint of the complex was far enough along to show its orientation. The house I’m living in gets a lot of light from all four directions and I'm worried that with all the unit’s windows facing the same way it will be like living in a cave where the sun never gets a chance to fill the depths of place. I had planned on taking a compass with me to help me judge the sun’s path outside my future windows.

I have three compasses. One is on the top of a ring, a cereal box top premium that is part of my childhood, secret agent collection. One is an antique pin-on brass compass, circa 1940s, made for deer hunters that hasn’t changed in style since Marbles, Michigan first started making them. Both my dad and husband had one...this compass just happened to be my husband's. It has no real value other than sentimental which is why I keep on my media cabinet to remind me that I'm grounded and never lost when I've got a compass to help me find my past, present and my future. The third compass I discovered while I was prepping my husband’s pocket watches to sell on e-Bay. I had saved what I thought was a U.S. Army, cavalry era pocket watch to sell last, thinking it was the most valuable of the collection. Imagine my surprise when I opened it and discovered it was a WWI military compass. It was made by a well known watch maker but they were made in such a large quantity that they’re only valuable if you consider $65-75 a lot of money. I'm keeping it.

If you've guessed by the bread crumbs I've been dropping---cliché #6---that I left all three of my compasses at home, you’d be right but as my mom was fond of saying, “There’s more than one way to skin a kitty.” (Idiom #2, the writing police are going to fine me for sure!) I lined up the back of my car with the front of my future unit and used the compass on the car’s dashboard to determine I’ll be a facing northeast. Just enough east to get morning sunshine across the planned wildflower garden which will be open maybe the length of a football field away to a tree line. And I'll be facing just north enough to get the perfect Artist’s North Light. My painting easel will feel right at home parked next to the floor-to-ceiling windows in the living room.

While I was there taking pictures a couple of guys were walking on the road that goes though the new and older parts of the complex and they stopped to talk. They told me where all the walking trails are and not to take my dog on the one through the woods or he’ll give me poison ivy. (Duly noted and appreciated.) They told me about the hawks and owls that will be hunting right outside my windows and the swans down at the lake. I told them about the restaurants that will be in this new section that they’ll also be able to use and about the farmhouse table concept one of the restaurants will have and that led to a conversation about travel experiences.

They asked a lot of questions about the layout of the units and I asked them a lot of questions about the management of this non-profit CCC and they spoke very highly about everything they do. They live in the two bedroom condo part of the complex, one had a wife in the memory care building. When I told them it was going to be like moving in to a college dorm when we all move in at that same time and one of the guys said to the other one, “We’re going to have to watch this one” then to me he asked, “Are you going to be hanging a bra on your doorknob when there’s a little action going on inside? Remember the ties on the doorknobs back in our day?” I laughed and replied, “No way! Bras cost too much these days.” The other guy looked away like he was embarrassed that his walking partner brought up the topic of bras and ties on doorknobs while I tried to decide if these guys were twins or just dressed that way. Twins, I decided. We must have talked a half hour and on the way home I was happy I’d made my 2020 4th of July trip to my future.

That night, though, was scary. With so many public fireworks displays canceled, way too many of my neighbors were setting them off. On all four sides of my house and as far in the distance as I could see. It felt and sounded like a war zone. And it was like I had strobe lights inside my house---yellow, green, blue and red pulsating on the walls with the loud booming and hissing that also vibrated my floors and windowpanes. Levi, in the past, has not been afraid of fireworks but this year he made his displeasure heard and for awhile I pretended to be one of those thunder-shirts while I wedged him between me and the arm of the sofa. I thought they'd set the house or woods behind me on fire so turned on my wrinkling system just in case sparks fell in my yard and I was grateful I'd gotten my eaves-troughs cleaned out recently. The icky icing on the cake was my house filled up with the eye-watering smell of gun powder smoke. Happy 4th of July from Pandemic Park. I hope I never have have to end another one end like this one did. ©