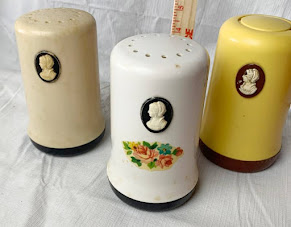 Here we go again. It’s Saturday and I don’t have a single idea for what I’m going to write for next Wednesday’s post. I suppose the weather is a good place to start. It’s not snowing. Check the ‘Good Things’ box. But it snowed recently so the snow on the ground is so clean and bright in the morning sun that my backyard looks like a field of diamonds. It’s a cliché thing to say but it’s true and I’m checking the 'Good Things’ box again. I’ll do another check mark for the angle of the sun which is hitting the crystals hanging in my windows just right so that my walls are covered with rainbows. I started counting prism created rainbows and gave up at thirty-six. The record count was 98. Who can be sad when you’re standing inside a place splashed with bright colors that only happens when conditions are just right and by chance you’re there to enjoy it? I’m going to miss the light in this house. With all the windows and glass surfaces covering pieces of art some of those rainbows end up being reflected beyond their natural reach, even around corners to places that still amaze me. No one could ever have an affair under their spouse’s nose in this house without a stolen kiss being reflected on a glass surface giving them away. I can even watch a television screen that’s behind my back using a reflection on a window.

Living here has made me believe that many of the UFOs that people see are just reflected light coming from miles away and bouncing off common stuff. For example, last year a bouquet of twelve silver helium filled balloons, tied together at the bottom but traveling as one, escaped from a party back East and caused a frenzy of UFO reports as they flickered and reflected lights off their innocent surfaces as they changed positions in the wind. Well, not so innocent surfaces. Balloons are bad for the environment and wildlife but that’s another story for another day. Anyway, did you know that reports of UFOs are up? Folks in the know think that’s because the pandemic has given people more time to look at the sky. And looking up they’re seeing easily explained phenomenon they've never noticed before.

New topic: E-Bay sales were a bust last week with only nine of my twenty things listed selling. Several reasons explain that. One, when half the country is dealing with power outrages or shoveling out after a snow storm or glued to their TVs during a crisis, e-Bay bidding is down but another part of the equation is the stuff I’m selling is more common than the things I was selling earlier in my downsizing project. Thus it might take a few relists and price reductions to see the stuff on my e-Bay shelf mosey on down to the post office. I’ve just enacted a three-strikes-and-it’s-off-to-Goodwill rule for what's left. I rarely needed relists in the past.

I did have an unexpected bidding war on a wall plaque seashore from the ‘50s last week. It was one of those Lucite things with shells embedded in it, very corny and cliché for bathroom walls of the era. I debated back and forth about keeping it for my cottage themed future home or at least giving it to my niece who is slowly turning her cottage into Mid-Century decor but it brought a good price so I’m not sad to see it go even though earlier in the year I had deemed fit for my 'keep it' box. (And I'll bet my niece, if she's reading this, is saying a prayer of thanks that I didn't offer it to her because I'm not sure she knows how to say 'no' to me. Just kidding, Cindy. You are welcome to take or reject anything I owe.)

I have a scouring can cover from the same era than didn’t get any bids so I might rethink keeping that if round two doesn’t sell it. It’s been in the family since the ‘50s when I believe my mom had to send coupons into the company to get the plastic Cameo can cover in the mail but I haven’t been able to find any history on it to know that for sure. Putting a little history in a listing helps sell a piece---sets it apart from other listings. Some listings are saying the covers are Bakelite, not plastic, but I would never put that in a listing without confirmation. Bakelite would up its value. I always loved it when iconic things like this can cover and the seahorse get sold to buyers in California because in my imagination I see my treasures ending up in the props inventory of a motion picture company. In my next life prop procurement is what I'll want to be when I grow up. It checks all my favorite boxes: research, organizational skills and unlimited storage space.

Not everything I’m getting ready to list on e-Bay now is of lesser quality stuff than I was doing earlier in my downsizing project. I’m starting to go through the stuff I’d decided to keep and I’m picking a few to let go of. For example I have 1897 mechanical pencil sharper that’s thirteen inches long and made of cast iron. Number two pencils are my preferred writing instruments but that’s not why I’m on the fence about selling it. Industrial mechanical stuff is hot right now and this piece will sell for $300 to $400. I’ve loved it for years and it's been a fascinating piece for show-and-tell but that kind of cash will go a long way towards an area rug I’ll need in my new place. I’ve got the sharper photographed and packed for shipping but I still haven’t pulled the trigger on listing it. Baby steps in between the giant steps. I’m going to be so bored after I move and have nothing left to research. So many things that I’ve had for years I’ve had to reacquaint myself with again to write up listings and sometimes that research makes me fall in love with a piece all over again. When that happens I ask myself, "Does this really fit the beach cottage theme I'm going for?" And with the pencil sharper I answer, "Yes it does if the cottage is owned by a wanna be writer and artist." © 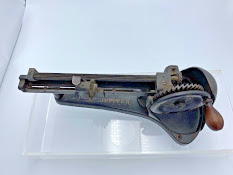 P.S. After purging all the stuff out of my kitchen cabinets (a recent blog topic) I couldn't help but buy a new coffee cup at Wayfair. It was one of these deals where if you spend $4.00 more you get free shipping that would have cost you $12.00. My new cup reminds me of childhood and of singing that song on the drive to the cottage. I'll be drinking my morning coffee in it after I move. 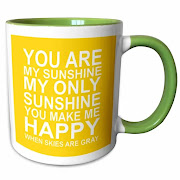