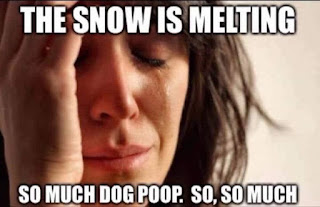 These past few days of rising temperatures and sunny days have elevated everyone’s mood and made it easier to move from point A to point B and beyond but I suspect it will take more than a week of good news from Mother Nature to melt all our snow. And with each layer that melts more dog poop in the Levi’s pen is revealed so I’ve had to add picking it up to my daily list of things to do. It’s not an easy task for someone afraid of falling on the icy snow pack but I have my trusty garden hoe to dislodge the frozen “logs” and my long handled pooper scooper. I also have ice fishing cleats on the bottom of my boots so eventually the job will come to an end without any broken bones.

Sometimes I can’t believe how much Levi’s life is going to change after we move. For one thing, he’ll never get to pee or poop in private again because I’ll have to walk Levi each and every time and follow along picking up his poop as soon as he drops it. Now, his walks are sporadic and never in winter or at either end of the day. Not in the winter because I’m afraid of falling on icy sidewalks---did I mention heated sidewalks in my future?---and not in early morning or late at night because I don’t like to be dressed in street clothes any longer than I have to. And on rainy days? He’s stubborn about going outside in the rain and I’m sure his avoid-mom-dragging-him-out antics are going to amuse my future neighbors. His German roots makes him stubborn but I've been known to throw a hissy-fit right back at him.

Levi’s life this summer is going to be confusing for him as deep cleaning and maintenance people start coming in and out of the house. I’ve even started packing some stuff so when the time comes to list the house I won’t have to do so much depersonalizing the place. However, my once empty library shelves have filled up again with boxes of stuff packed and ready to list on e-Bay. It’s been a long haul getting rid of collectibles on e-Bay but with the local auction house I was using going out of business I had no real choice except to give it all away which would have been a financially stupid decision. By mid-March I'll redirect my energy to selling off art and the pieces in the garage that are earmarked to sell on Facebook Market Place. Spring is going to be busy. I also have to dismantle my shipping and packing area in my garage. Spring isn't even here yet and already I sick of the work it will bring.

Levi’s also going to be spending the spring and summer getting himself on a schedule for his body functions so we'll be doing a long walk daily---at five---and short ‘quick pees’ at 10:00, noon, 3:00, 8:00, 10:00 again and midnight. A ‘quick pee’ in dog talk means Levi gets to go out to the streetlight in front of my house and mark it which actually takes forever and a day for him to read the pee mail other dogs have left behind. (He’s not allowed to use mailboxes even though the other dogs in the neighborhood do which, I think, is rude for their humans to allow. Who wants to get a whiff of urine when they grab their mail?) This schedule isn’t too far off from when Levi usually wants to go outside but it’s me that needs the schedule more than he does. It's too easy, now, to just open the back door and let him do his thing.

But I am looking forward to those heated sidewalks. I hope they aren’t so warm that I’ll have to start putting boots on Levi. He’s a nudist and hates wearing sweaters so I imagine trying to corral him to put him in boots would be like catching a greased pig. We used to have a poodle who wore boots and loved getting dressed up. I could have put her in a risqué bustier, fishnet stockings, high-heeled boots and red lipstick she would have paraded them up and down a runway like she owned the place. Poodles really are show offs. (Ever have a dog eat a tube of lipstick? It's hard to get mad when they look so silly and you're more worried about the color of their next bowel movement.)

I bought a neat dog walker’s cross-body bag---I'm used to just stuffing some baggies in a pocket and taking off. It’s got a place on the side where poop bags are dispensed and I added a jump ring on the other side where I can hang a full bag of poop using a bread bag clip so I can remain hands free. It has pockets for keys, a cell phone, hand wipes and treats. Another jump ring could give me a place to hang a water bottle and the bag came with a collapsible bowl. In this neighborhood there are lots of dogs that can turn Levi into the Barker-in-Chief so I'm also going to carry my anti-bark gadget. He sits sweetly when little kids approach but another dog has him pulling my arm out of its socket and we’re going to work on that over the summer. The director of the continuum care complex where I’m moving couldn’t tell me how many dogs will be moving in to my building but Levi won’t be the only one, she says. Oh, well, I’ll worry about that bridge to cross when I get there. Now, I have to come up with a $1,000 to cover the cost of some elective surgery for Levi---removing a large, fatty tumor between his tail and his rectum and while he's under they'll clean his teeth, too. I’m pretty sure my income tax refund will cover it once I get around to filing my taxes---but it's going to cut into my fund for a new La-Z-Boy, computer desk and bar-cart-turned artist-in-residence-cart. Oh, yes, I've been online shopping! © 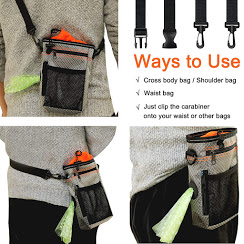