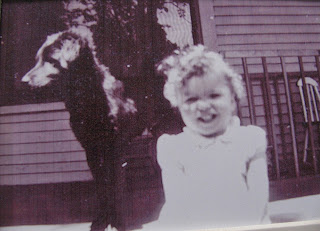 Dogs are like little people who don’t wear clothes or own big collections of CDs or radiator caps that you have to dispose of when they pass. You don’t have to close their bank accounts, stop their cell service or notify Social Security or the post office but I do need to get Levi taken out of my will. Although come to think about it he’s not mentioned specifically by name. It just says that a $1,000 for every year left on my dog’s estimated life span is to follow the canine to help with care. And that amount is to be taken out of my assets before the four humans in my will gets a cut of whatever I might leave behind when I die. Now that Levi is gone one of my heirs could try to pass a puppy off as one I recently adopted and scam my estate out of an extra twelve-fifteen grand which is as good as any other reason to justify me actually getting a puppy. Screwball logic. I could teach a class in that.

Ya, I know, Levi’s only been gone ten days. It’s too soon to be thinking of getting another dog and I ask myself if it’s fair to get one when my own life expectancy wouldn’t out last a puppy’s. But here’s the thing. I’ve never in my entire life not had a dog. When I told the son-I-wish-I-had and my youngest niece about my should-I-or-shouldn’t-I dilemma the son said, “You’re the best dog mom I’ve ever known. You need to get one.” And my niece said I should because “you won’t be you without a dog” and we laughed about how my mom used to yell at me, “Put that dog down! She has legs!” In my defense I held Sarah to keep her from getting stepped on when there were a lot of people in the room. If I happened to be swaying from side to side at the same time that didn't mean my dog was spoiled. She was well behaved, as sweet as pecan pie and as cuddly as a teddy bear.

I won't lie. A few days ago I looked at rescue dogs at the Pet Finder’s website and I know myself well enough to know that I don’t want to take on one of their senior dogs. The under 12-15 pounds dogs like I'd want all seem to come with housebreaking and dental issues and I wondered if at my age they would let me adopt a rescue under five. My oldest niece says they only care if you've got the income and a safe space to have a dog and she just helped my older brother find a rescue dog so I pretty much know where she stands on my too-old-or-not-to-have-another-dog dilemma.

Then I did a brief search of puppies for sale in the area and got sticker shock. I expected $1,000 but $2,500 to $5,000? Wow! Either way, I feel the pressure to decide sooner rather than later because it would be so much easier to train a dog or puppy while I’m still living in a single family home. At Pet Finders many of the listings say, "Fenced yard required, No exceptions!"---especially the with the little dogs---which means I'd never get an adoption placement after I move. And did I mention I'd need a hypoallergenic dog? In other words my search criteria would be limited to a breed that doesn't shed, doesn't get bigger than 12-15 pounds and isn't so old that it need thousands of dollars' worth of dental care and a dog that doesn't have housebreaking issues well into adulthood. The negatives are stacking up quickly against getting a rescue.

I decided that I’ll make myself wait until my birthday in April before I look at anymore puppy and rescue sites. Who knows, by then maybe I’d quit missing having another living presence in the house, quit expecting to see Levi here and there. The longest I’ve ever been between dogs is four months and
we got Levi the day after our other dog died, but Cooper was older and had been sick for six months. I was never sorry that we got Levi so soon after. He brought a joyful sense of purpose to our days after months of watching Cooper fade away. And finding Levi was either fate or serendipity---I could never figure out what to call it. Several weeks before we got him I’d been early for an appointment, had some time to kill and there was a sign by the road that said, “Puppies for Sale.” I stopped to kill some time and they had a boy and a girl schnauzer left in the litter. I fell in love with the little girl.

Two weeks later, the day after Cooper died, I told my husband I was going to go back and see if the girl was still there and if she was, she was meant to be ours. She was gone but Levi came home with us instead. He was 14 weeks old by then and his price had been reduced from $800 to $400. He turned out to be the easiest puppy I've ever trained and Cooper had been just the opposite. Cooper had been taken away from his mom and weaned at five weeks---way too young and that caused some issues that

required the services of a "doggie shrink", a guy the vet recommended who trained guard dogs for the military. In two sessions he evaluated what my nine month old poodle had already learned at obedience school and how he interacted with a litter of German shepherds twice Cooper's size and taught me how to get tiny Cooper to understand that under no circumstances was he allowed to bite. To this day I swear it was the threat of a shock collar more than me developing a super-dick Alpha persona that did the trick. I keep thinking, do I really want to go through all that again, a year of intense dog training? Could I even find my Alpha voice after years of not needing it with Levi? Most of the time I answer yes/maybe. Decisions, decisions. I just may let fate or serendipity make the choice like it did with Levi.


Levi’s things were everywhere and I’m still running into stuff…like in the freezer where I kept a bag of string beans for his snacks. Coupons in my coupon envelope. And it took my breathe away when I opened the front door and saw the sticker on the storm door that reads, "In case of an emergency please rescue me" and then it showed a picture of a schnauzer. Doing my income taxes I ran across Levi's folder in my file cabinet and I still haven't put those papers through the shredder. It took me several years to shred my husband's papers and even then the project was laced with tears. It seems so final to cancel a life out like that. Blankets and beds and stainless steel dishes. Collars, harnesses, leashes. You name it, Levi didn’t lack for material possessions just like his human parents but at least that stuff can all be donated if I choose not to love on another dog. Shredded paper by default have to end up in the garbage because recycling doesn't want them clogging up their machines.

The photo at the top was taken of Blackie---my first dog---and me sitting outside of a playpen. I have others showing us together inside the playpen, Blackie in various sizes, me not so much. We were raised together only she learned how to escape the ‘cage’ long before I did. But I’ve been told she’d jump back in if I was crying and if my mom didn't come in a timely fashion Blackie would bark to help get her attention.

Got time for one more dog story? This one is about Jason, a poodle who came after Sarah and before Cooper. He was a wise, old soul right from puppyhood and one time we took him to a nursing home to visit my husband's mom and there was another resident there who had a bunch of stuffed dogs lined up on her bed. She obviously liked dogs so we thought maybe she's like to pet Jason. When we asked from the doorway of her room she screamed at us to get our mangy dog away from hers! We learned later that the woman spent her days 'training' her dogs. We also learned that when we took Jason to visit the nursing home that if we sat in the lobby, hordes of residents would come to us wanting to love on our perfectly groomed 'mangy dog.' Jason could do circus tricks and parlor games so he had a fan club at the nursing home. Wise old soul that he was Jason seemed to know what each person in his audience needed be it a cuddle-hug, a handshake, a slide-of-hand trick, or to make deep eye contract as if he was conducting a seance and helping them communicate to their own, long lost pets. Oh my gosh, I have so many great memories that involve the dogs in my life but this post is already way too long. ©

Cooper picked some interesting places to pee and my husband loved photo-documented them---it's a guy thing, I suppose. Cooper more than earned his nickname, The Trouble Bubble but he was also a lot of fun and he kept his own blog both before and after he died. Angel Cooper helped little Levi learn the ropes during his puppyhood and he introduced Levi to his other siblings up at the Rainbow Bridge.