The Meeting - The First of Four 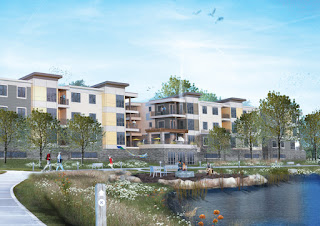 Yesterday was a Red Letter Day in the life of this blogger. I went to the first of four future residences meetings to get orientated on the move to the continuum care campus. The other meetings will come once a month from now on with topics like covering the Handbook of Rules & Safety...things like where to go for tornado warnings, in case of fire, using our panic buttons, etc. At one meeting we’ll learning how to active the underground parking door, get into the buildings and buzzing our guests in, get maintenance. Another meeting will cover tech issues and how to use the trash compactor, the intercom, run appliances, how to get IT to fix any TV, phone or WiFi issues.

They have their BIG inspection for occupancy certification coming up starting mid-June and until every single one of the 52 units plus the restaurants and public areas all passes that inspection no one gets to move into the buildings. City inspectors have been following construction monthly every step of the way and the construction company doesn’t expect that certification process to be anything but routine, but it's time consuming and thorough. They started scheduling move-ins appointments and mine is October 5th at 8-12:00. Note: no one can actually move in until October 4th. That has to do with the elevators having to pass a different-from-the-certification test first but they've built a lot of time into their schedule in case they have bugs to work out. Not sure when landscaping happens.

The move-in calendar is going to be a logistical, complicated process fit for a military commander to manage 52 of us spread out over October. We’ll get a four hour window of time to use the elevator all to ourselves and two people will be moving into each of the two buildings at the same time. Being in the first wave of those who move in is going to be creepy that first night, sleeping in a huge buildings with just eight occupied units. And noisy for the first few weeks. If all doesn't go according to plans I can push my move-in appointment back but I would hate that.

Because of social distancing we sat with only two of us at a table for this meeting but when they asked for a show of hands on who has been vaccinated, every single person in the room raised their hand. The masks came off and the wine and cocktails flowed. I didn’t have a drink because I have enough trouble concentrating when I drive so I’ll wait until after I move in before getting into social drinking. Haven’t done that since I lost my designated drive to my husband’s stroke in 2001. I’ve probably turn into a lush which is okay, you’d like drunk me. I get really silly and how much trouble can I get into when I'll just have to walk the distance of a half a city block to get back home? As always with this group the food was both pretty and delicious. The chef in my future home is going to be one of my favorite people on the campus.

My table mate turned out to be a woman I hadn’t met before and we will be living in the same building, on the same floor. We clicked right off the bat and our conservation was organic and easy. She’s a widow, was a teacher, loves to read, she and her husband never had kids (like Don and me). And she’s moving into the continuum care campus for the same reasons I am: 1) to make it easier on our nieces who are named as our powers of attorney, and 2) to make our own decisions, now while we still can, about where we'll live should we ever need more oversight, skilled nursing, a memory care unit or Hospice…which are all on this non-profit campus and part of the CC promise we’re buying into.

Things we learned at this first meeting: We’ll have two WiFi accesses. One will be just for our personal space with 30 Mbps (most homes have 29) and the other one will be for all the public spaces and for our guests to use with 10 Mbps. We’ll get 62 channels of free TV. With both the TV and WiFi we can upgrade if we want to pay a monthly fee. We’re getting a free 3’ x 3’ “cage storage” space plus a locking storage unit at the end of our parking space. We can get a landline for a fee if we want, but we won’t be able to keep our existing phone numbers. And the director of the CCC is going to ask the bank that is keeping all our deposits in escrow if they’d do bridge loans for those of us who might need or want them. That would simplify things greatly! Most of us seem to be in the same catch-22 of needing to sell and close on our houses to finish paying off the new unit and we can’t move in until we’ve made that final payment.

June is going to be a busy month of getting my house ready to list. Already I’ve had an electrician come out to swap out a light fixture that decided it didn’t want to work anymore. Power washing the siding so I can get the windows washed inside and out is scheduled as is vacuuming down the basement. The biggest job left is dismantling my e-Bay shipping area in the garage, selling off shelving out there and maybe move some furniture out there to sell on Facebook Marketplace. I also have to get my computer wardrobe out of my kitchen---not looking forward to that. Getting the carpets professional cleaning will come near the end of June. The photo shoot of my house will take place the first week in July. Things are moving right along.

The photo at the top is the artist's rendering of the lake side of the complex. I'm on the opposite, cheap side of the building without the great lake view and without the extra 208 or 344 square footage that would have cost me an additional $250+ a month and an extra $15,000+ to buy into the campus. When I picked out my unit my thought process was that not having a great view will force me to spend more time in the public areas or outside walking. $250+ a month is a good chunk of change and by saving that I won't have to worry as much about my budget. It was a trade off and I'm still not sure I made the right decision but I made it all by myself without asking for an opinion from anyone else. Whether it turns out to be the right or wrong decision, I wanted to own it, not blame anyone else if I come to regret not having a lake view. I did the same thing when I put the first deposit down. I didn't tell a soul that I was thinking about buying into the campus until after it was a done deal. Anyone else like that? When I make major, life changing decisions I want to be sure my voice is the only one I hear.  ©

P.S. Writing this made me realize when we get to pick out our parking units I might be able to score one with a window facing the lake. I'm in the low 20s in the picking order. That would tickle my funny bone to be able to brag about my lake view. I could even put a chair down there in my underground parking space just to add to the humor.