Never too Old to be Open to New Possibilities 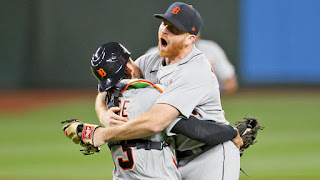 Someone stole my sports-allergic personality and replaced it with a person who actually watched two baseball games on TV recently. I've only watched three games start to finish in my nearly eight decades on earth. The other game I saw in person, a high school game where a great-nephew on my husband’s side was playing and my husband got hit in the forehead with a baseball. Neither one of us wanted to be there and we were glad we had a good excuse not to repeat the experience. In the world of do-overs, though, I would have insisted that Don go to the hospital for a scan but he was the type of guy who thought an aspirin could cure a severed limb.

One of the things I loved about my husband was he didn’t follow any sports, couldn’t care less. In my twenties I dated guys who were into golf, tennis, snow skiing, football and hockey and being a dutiful girlfriend during the age of Aquarius I tried to like those sports too, even took lessons in the first three. With the exception of skiing my interest was faked and went away with the break ups. In that power-dating era of my life I had a little sailboat and it never occurred to me to resent the fact that none of my boyfriends took an interest in what I enjoyed doing for fun. When Don came along he went out sailing with me once but he slid off the sunfish and got dumped in the lake. He couldn't swim so who could blame him for not wanting to go again.

While I’ve never liked watching sports on TV most of my favorite movies and books are about sports. Tin Cup, Lee Cobb, The Legend of Bagger Vance, 42, The Natural, A League of Their Own, Seabiscuit, Secretariat and I’d be lying by omission if I didn’t include all the baseball themed romance books I’ve devoured during the pandemic. Hockey too. But it was a book I read while I had to be away from the house for showings that finally got me curious enough about baseball that I stopped on a Cardinal's game while I was channel surfing.

My TV viewing since shortly after the January Insurrection as been practically nonexistence. And this is coming from a person who for my entire adult life would turn the TV on first thing in the morning, turning it off the last thing at night. Between the pandemic and getting my house ready to sell and the state of the nation I just couldn’t handle the stress of watching politics on TV. And I was thoroughly addicted to all the news and pundit shows before that. Don and I followed politics with the same dedication as super-fans of major league sports. We even had all the political trading cards when Newt Gingrich was in the senate.

After accepting an offer on the house it was like a cloud gave way to the sun and TV viewing started creeping back into my life but all the pundit-type news shows are still talking about the Insurrection, Trump and anti-vaxxers. When that point in the ”Bermuda Triangle” going inside my head lined up with reading a great baseball themed romance book and me finding a baseball game while channel surfing, I decided I was going to teach myself about the game, give myself something new to follow on TV.  I just need to pick a team, become a fan and maybe find a Baseball for Dummies book. Everything is better with a book of instructions.

It wouldn’t be the first time I decided to teach myself about something. Whether or not it sticks is another matter. All I really know for sure is that when a romance author can make a baseball team come to life enough to inspire me to watch a game, that writer has some serious street creed going on. Or am I just reverting back to my dating days when I’d became a chameleon with the one I was with? And, yes, I've got a couple of new book boyfriends who play baseball. Good thing I’m not into reading about serial murderers because that Chameleon Theory a strong possibility. Just sayin’.

The second game I watched, the Tigers vs. the Mariners where Spencer Turnbull made baseball history by pitching a no hitter, was interesting to watch but the eight minute highlights of the game I watched the next day was actually more fun to watch. The game itself seemed so slow. I also got annoyed during the game because the network didn’t label the replays as such or have the camera follow all the balls. Who throws those foul balls back to the catcher? Would it kill the network to think of the newbies just tuning in? After that game was over I watched Inside the Tigers that did an interview with Casey Mize and his girlfriend and I kid you not it felt like I’d read their story in a romance book.

Of course, we all know that a good sports story, whether fiction or true-life, is about more than scoring and breaking records. They’re about over coming odds, of survival and dedication and caring about the underdog. Even nurture vs. nature. Dare I say there’s also a lot of behind-the-scenes politics involved in the sports world plus lots of human interest profiles and tributes. And don’t we all like to hear about what inspires others to greatness?  If you follow baseball, who is your favorite team and why? Don't let me pick a team by whose got the best uniforms! ©