He's in the Dog House Now! 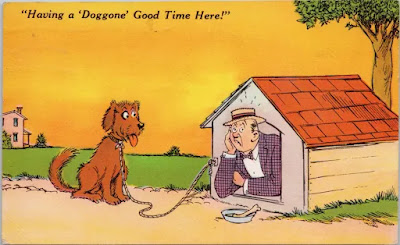 I'm write something current for Saturday. In the meantime this post is one of my favorites  From the Planet Aphasia, my caregiver blog. You don't have to be a caregiver to understand the humor or the stress of the day I wrote about below....
The atmosphere here on the Planet Aphasia is warping my waffles. Don't ask me what that means. If your waffles are warped too, you'll understand. If not, trust me when I say that it's not a good thing here in the city of Caregiverville.

Every year there are eighty thousand new cases of the language disorder, aphasia, and I get a singer. Headline: Giddy Husband Tools Around In his Wheelchair Greeting his Day Like he's Been Over-Dosing On his Celexia Again.

The problem is no one was having a birthday. The song is one of two that Don's aphasic brain can sing using actual lyrics. Well, sort of---the words often come out like they went through a blender first.

I should be happy for lyrics. Any lyrics. After all, Don has so few words in his vocabulary since his stroke. But these two songs are different. They're ones my husband learned when he was still using a highchair and they're stored in a relatively undamaged part of his brain. Even so, hearing "happy birthday" was a pleasure this morning---for the first hour. In the second hour, sweet little wifey poo that I am, I politely requested that he switch to his other song.

"Jesus likes me. Yo, you know," he complied. Okay, so he's got work to do on that childhood favorite before he's ready for American Idol.

"Yo," I interrupted Don, "Jesus likes me? I think he loved you when you were a kid."

This afternoon we were coming back from running errands and no one had yet found the switch on the back of Don's head to turn him off and he was getting annoying. Back up here---I'll admit that I was more than annoyed. I'd reached my quota of being a Nice Nancy about the never ending, loop of songs.

I pulled over to the side of the road and told him to get out if he couldn't behave himself. Hey, it worked on my brother and me when we were kids so I figured why not give it a try. And for a split second I thought that I really could do that, shove Don and his songs out the door and drive off. How much trouble could a person get into for leaving a wheelchair bound guy sitting at the side of a country road, singing "Yo, Jesus?"

When I shifted the car into park, Don looked at me as if---well, as if I'd warped my waffles for good this time, permanently indenting brain matter that isn't suppose to be marked with such a precise pattern of man-made deformities.

"I mean it," I practically shouted, trying to sound mean and bitchy. "Get out or get quiet!" If I were inclined to be honest here I'd admit that it wasn't much of a stretch for me to be the perfect bitch. Four hours of "Jesus has a birthday" or whatever it was that Don was singing at the top of his happy little lungs was doing a number on my head.

My husband took in my angry words and gave me an angelic smile, his blue eyes smoldering with mischievousness and after a very---and I do mean very---long pregnant, aphasia driven pause he said, "Change lanes."

I stared at Don for a full minute. I couldn't have been more astonished if he'd just used ruby red fingernail polish for eye liner and I wanted to bang my head on the steering wheel. (Now you know how waffles get warped in Caregiverville.) It's been five years, ten months and seven days that I've been trying to teach Don to say "change lanes" and "turn here" when we're in the car and he's frantically trying to get me to do one or the other. And the gods of Aphasia, bless their wicked asses, picked that time to let the words come down the pike and out his mouth.

"Okay, buddy-boy," I said with recessing gruffness as my bitch persona made her exit and I shifted the Blazer back in gear. "I'll change lanes and we'll go home. Together. But don't you forget that you're in the dog house now!" ©