The Siblings and our Parents 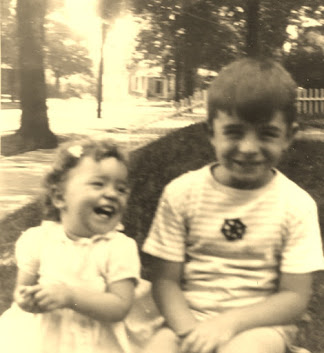 My brother is settling into Memory Care quite well although an aid there just told me he thinks he’s in a hospital. I’m not surprised because on one of my visits he asked me if he was sick and dying because, he said, people keep coming into his room in the middle of the night to check his back or his lungs. I happened to run into the director of the dementia activities program a few days after that conversation so I asked her what might be going on at night to give him that idea and she told me with some patients they check to see if they are still dry and need to be walked to the bathroom. Mystery solved.

I learned with my dad’s dementia that sometimes what we thought was an illusion in his head was actually real. For several weeks Dad claimed he had a chipmunk in his bed and no one believed him. That is until on a visit I sat in the living room and watched one come out from behind a piece of furniture and run the full length of his house and go directly into my Dad’s bedroom. This is another good reason to take the advice of a dementia expert I heard speak recently to never to argue with dementia patients. Once in awhile they’re right (my words and conjecture, not hers). But she did say dementia patients are losing their language skills to make what is going on with them clear to others. (I feel that happening to me when I talk and it’s downright scary.)

Dad also had what we thought was a disconnect with reality when he kept complaining that he couldn’t sleep at night because “there were people in his living room having a party.” Long story short my brother put a timer on his TV and that ended the “parties.” My brother and I spent five years problem solving at dad’s house to keep him safe and happy and to this day I’m proud of what we accomplished. Those years brought some of the best memories of bonding with dad but also some of worse fights between my brother and me. As with most kids in that stage of life---trying their best to care for an aging parent---we were under a lot of stress and after Dad passed it took a year before the tension between my brother and I dissipated.

After my mom died in 1983 I spent a few years gathering stories and memories from everyone in my family. It was my way of grieving her. Her death was tragic and painful because it was spiked with preventable missteps in the medical community. A doctor afterward told me having all your blood slowing seep out of your organs into your body cavity is one of the most painful ways to die and the fact that her doctor told my brother and me that she was just an old woman looking for attention, that there was nothing wrong with her, is another reason why when an older person asks a question like my brother did, I try to understand where it’s coming from and answer honestly. For example, I told my brother the day he asked me if he was dying that his daughters would have told me if that were true and they hadn't said anything remotely like that to me. The "pause and pivot to an alternative topic" approach is the recommended method of handling much of what dementia patients obsess about but I think/hope I'm still good enough at reading my brother to know when to use it and when to give him a red meat answer.

Back to Mom: It wasn’t just the weeks of pain Mom went through that were preventable if she’d been taken seriously but the ambulance that picked her up the day she died caught on fire on the way the hospital, something Ford Motor who built that model ambulance knew was happening on trips longer than x-number of miles. We didn’t take part in the class action suit that followed a bunch of fires like what delayed mom's trip to ER but the last day to decide whether or not to join it was one of the hardest days of my life. But I had to let go of the pain of losing her and a lawsuit would have kept it going.

Complying the family stories finally gave me closure. And all those stories and memories I had gathered I pulled together and I printed out old school with my computer. I punched holes in the pages and bound all 125 pages of single spaced typing together plus sections of photos, hand writing samples, poetry by family and favorite recipes. I hadn’t read the book in decades but yesterday I took my copy down to my brother’s building and read him the first chapter. My plan is to read to him once a week and if my first reading is any indication it’s going to be a warm and rewarding experience for both of us.

In the first chapter are lots of quotes of things my dad said and my brother shocked me when I’d start reading a couple of them and Jerry would finish them. "How did you know that?" I asked at one point and he said, "Dad told that story about grandpa a lot." As a read, I’d stop occasionally so we could talk about whether or not he remembered things like being in charge of crushing tin cans to put out to the curb during WWII and most often he did and he’d add a little more color to the story than what I had written on the pages. All and all reviewing our lives this way is going to be a bonding experience. I should probably run the idea past the director of the dementia activities program before I get too far into the project. But I’m pretty sure it fits in perfectly with what they are trying to accomplish in Memory Care. Fingers crossed. ©