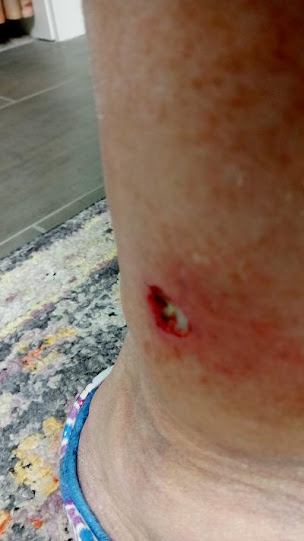 According to the Mayo Clinic website, “Mohs surgery is a procedure used to treat skin cancer. This surgery involves cutting away thin layers of skin. Each thin layer is looked at closely for signs of cancer. The process keeps going until there are no signs of cancer. The goal of Mohs surgery is to remove all of the skin cancer without hurting the healthy skin around it. Mohs surgery allows the surgeon to be sure that all the cancer is gone. This makes it more likely that the cancer is cured. During Mohs surgery, medicine to numb the area is usually given so that you don't feel pain. Mohs surgery is also called Mohs micrographic surgery.” What they don't tell you is at the surgical center you’ll be dispensed back into a waiting room in between skin scrapping while the cells are looked under a microscope and you end up being at the place all afternoon. In my case, I couldn’t get their WiFi to work with my Kindle so it was a long afternoon. I had downloaded the psychological thriller, The Sleepover by one of my favorite authors Keri Beevis, to read. But instead I had to read medical pamphlets and get dizzy from watching fish swimming around in a giant blue tank.

It was true that I didn’t feel much after the numbing needles went around the mole site but what the Mayo Clinic website failed to explain (but I found at another site when I got home) is that after the surgery they cauterize the surgery site “with acid or hot metal or lasers. Such a procedure is naturally quite painful.” I’m here to say that ‘quite painful’ is an understand! It seemed to go on forever and ever while the doctor who was doing it kept saying “I’m sorry! I’m so sorry!” Had she warned me ahead of time that it was coming maybe it wouldn’t have hurt so much but even while the pain was going on she didn’t explain what she was doing until I asked. I don’t mind admitting it brought tears to my eyes.

Two days later when I could finally take the dressing off my ankle I saw a perfectly round and deep wound that is slightly smaller than a dime. (Photo above.) The ankle is a place where it’s almost impossible to put in stitches.They tend to tear out, the doctor said, and that ends up making the wound area bigger. I believe her, having had that exact thing happen on one of my recent thumb surgeries. So I have to keep it covered for a month hoping it will heal on its own. If it’s not starting to heal by my one month check up, other steps will be needed---a skin graft, hyperbaric or ultrasound therapy but I’m not going to borrow that kind of trouble…even though I can’t believe that ugly hole will heal without help. And I feel an Amazon order is in my future. Remember the bacon looking band-aids I posted a few weeks back? I'm pretty sure I'll still be having to keep the hole in my leg covered when spring and short pants are back.

I consider myself lucky because my brother had a skin cancer on his face that involved nerve damage and more than one surgeries. We both spent a lot of time in the water and sun growing up and---oops---sixty years later skin cancer shows up. Who knew back then that could happen? Back then we even drenched ourselves in baby oil and baked out in the sun to deepen our tans. I did have another cancer surgery---on the end of my nose that looked like the witch’s mole in the Wizard of Oz but being a vain woman I got into the dermatologist early-on for that one and that’s how I got my ‘teddy bear seam’ down the center of my nose.

Mohs surgery/treatment is a specialty and the doctor’s gay guy nurse was all of twelve years old. She was twenty-eight but I looked up her biography online and it was impressive. When I made the appointment at the dermatology center I was asked to pick between her and another Mohs specialist---an older guy close to retirement who started the center. “They are both good,” I was told, “but she will hold your hand more.” I thought that was an odd thing to tell a potential patient and I replied, “I don’t need hand holding. I just want this thing removed as soon as possible.” While the doctor was cauterizing the surgical site without warning I wanted to scream, “Is this your idea of hand holding?” But I didn’t. I was too busy wishing she’d given me a shot of whiskey and stick to bite down on the way they do in old black and white movies when they are about to dig a bullet or arrowhead out of someone’s shoulder. They held an old hunting knife over a fire before using it to burn the wound site to stop the bleeding. When my cauterizing was over, I made a statement about the way they did that procedure in the Old West to the nurse and he'd never heard of that. What am I one hundred and two years old? Nope. I’m guessing he really is twelve years old. As much as medicine has advanced over the past hundred years you'd think they would have found a better way to cauterize a wound, wouldn't you. At least give you a second round of numbing shots first. ©

* Photo of my mole site two days after surgery.