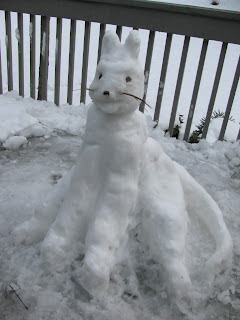 We’re getting our first major snow storm of the season and it’s coming down hard with 6 to 12 inches of snow predicted to accumulate over the next three days. For snowplowers like my husband was for decades (and I was for 17 years) a three day dump is not ideal for the first snow of the year. A one day and done thing is better for working out any bugs and for training new plowers. Even though we’d have new plowers do dry runs of their assigned places, everything looks different when it’s snowing. And back when we were in business it wasn’t common for people to have snow removal and lawn care businesses combined so they could employ people year around. Everyone who plowed for us worked other, daytime jobs as well and getting up in the middle of a cold snowy night takes some getting used to. We did commercial lots and the first predicted snow of the season would have us up checking the lots for when the magic hour would begin when the snow was two inches deep and we could call the crew in. With all-day long snows there is no need to check lots but the frustrating thing is that no matter how late you start (so lots would be ideally cleared for the business openings) it will look like you wasn’t there at all with the round-the-clock snowfalls.

Now, I’m sitting here looking across the parking lot to the Community Building where the wood shop is and where I was supposed to go to orientation class this morning. The shop is brand new and eventually that same, small building will house an art and crafts room. It’s a small, stand alone building where they also have Bible studies---all the things that could catch on fire, separate from the main campus. I want to learn to turn wood on a lathe to make bowls but I suspect I won’t be doing it until spring because I’m not keen on walking up and down a slight hill to get there in the winter. We have a heated sidewalk between and along the front of our two main buildings and last winter I felt completely safe plus we can go underground between those buildings if it’s too cold, but those options don’t extend to the little building across the way.

I was going to walk down to see my brother today, too. But that won’t happen with our non-stop snow. It’s beautiful though but it’s coming down so hard I can barely see the woods on the other side of our green space. Some kids who were visiting started building a snowman in our green-turned-white space. They didn’t stay long enough to finish and I’m wondering how long that headless snowman will stand out there begging me to forget that I’m old and have brittle bones. I shouldn’t even be dreaming about rolling a big ball of snow to finish the poor guy off. In 2017 I built a snow cat out on my deck and it was harder than I remembered from doing snow sculptures when was kid.

Last winter our resident Cheerleader made snow angels in the snow. She’s addicted to walking and even in the summer she walks with ski polls. She walks rain or shine, two hours a day in place of any kind of treatment for her brittle bones. She’s afraid of the side effects of treatments for osteoporosis---any drugs for that matter---where I’m afraid of not getting the infusions for my bones. I wish I liked exercise as much as she does but it seems like such a waste of time, specially since the same regiment of exercise and eating healthy didn’t do my husband’s cousin a damn bit of good. Dropped dead two days after we had great visit. A visit that had me thinking I really needed to shape up and start exercising more and eating better only to be shocked that I out lived her. We make so many choices in life, take so many chances and define our adventures by separate sets of criteria in different eras of our lives. One of my friends from my Red Hat Society days just came back from a ten day trip she took to Spain all by herself. I could hardly go to Indiana all by myself and I don’t even need a passport to go one state down. A big adventure to me, now, would be putting a head on our headless snowman and living to tell about it afterward.

Edit to add Saturday morning: We have 18 inches of snow and it won't be letting up until tomorrow morning. ©

* Yes, that's a photo of the snow cat I made five years ago.