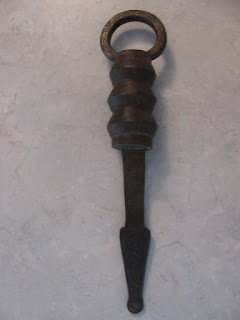 I’ve been invaded by tiny ants, or rather I should say the dog’s feeding area has been invaded. (Although in the process of killing them I found one crawling on my elbow!) It’s the second time this summer they’ve done that and I’m running out of new locations to put Levi’s food and water. This time I had to throw out the contents of his self-feeder---about three pounds of kibble. Hint: when your dog doesn’t want to eat, put your glasses on and look for ants. I don’t have any indoors ant spray because I’m guessing it’s not safe for Levi, so I used Lysol All Purpose Spray which I’m sure is just as toxic to dogs as ant spray but at least your floors get cleaner in the process of mass murdering the devil ants. Why is it that I still feel bad about killing a firefly last week but I have no sympathy for the ant carcass I just smeared all over the floor with the bottom of my shoe? He was a little scout, I presume, looking for his dead buddies that died by Lysol to drag them back to their nest to mourn or feed to his queen. Good luck with that, I wiped at least a hundred of them up with wet paper towels. I’ve seen ants carry off their dead but I made up the part about feeding them to their queen. But it sounds logical to me. It’s a cruel, hard world out there.

I’m struggling to write about something that doesn’t include the 'D' word in it. If you’ve been following my blog you’ll know which 'D' word I’m talking about. If not, I’ll give you a hint: It involves moving to a smaller home. I’ve only been at it for a month and I’ve come to the conclusion that this time around it feels different, more joyful. And I’ve further concluded that the joy is coming from a place where I have an exciting goal I’m working towards and not a painful experience driving me forward. I’ve only done the 'D' work twice in my life. Once after my husband’s stroke and once after he died. The first done under extremely stressful conditions, the second under a veil of sadness, tears falling like rain drops from Eeyore's cloud. Both times I was saying goodbye not only to things but to our whole way of life and saying hello to an unknown and murky future. However, I’m doing the 'D' work now because I will be moving on to life style that will come with very few responsibilities and I’ll be able to do my favorite things without the guilt of thinking I should be doing something else. I intend to be that quirky woman in the complex who paints and writes and knits and does the most complicated jigsaw puzzles on the planet---yes, the two-side puzzles, same picture on both side only slightly different view. My favorite one being a photograph of a pile of yellow No. 2 pencils.

I still haven’t decided if I’m going to take any quilting supplies with me but I’ve been thinking I should make one more quilt before I die. I don’t do them by machine so a box of ‘quarters’---quilters will know what those are---won’t take up much room. That box of fabric and a few quilters’ rulers, maybe some books of patterns and oh crap! I’ll need scissors and needles and thread, of my! How much hobby stuff can one fit in an eight foot long closet in my future den/hobby room and still have room for out-of-season coats?

After my three day marathon of working in the garage and making great progress I took Saturday off to go to Goodwill, recycling and the grocery store and to stop by the pet store for more kibble. As fortunate would have it, I had a $15 rewards coupon so the dog food was nearly free which just goes to prove there is balance in the universe…the ants taketh away, the coupon giveth back.

But before my afternoon trip to run the above errands I literally spent the morning trying to identify the above object and when Google images can’t ID something, you know you’ve got something rare. I once had a magazine article written about that very object but do you think I can remember what it said or where I put it or even if I kept it? Heck no! It’s a primitive lock---the tail/key comes out---but knowing for sure if it’s Roman or whatever can make the difference between e-Baying it for pocket change or hundreds. I’d donate it to a museum but I’d have to research museums to know which one exhibits that sort of thing which brings me right back to having to ID than dang thing first. It occurs to me that I really do have a lot of obscure information in my head; is it any wonder some of it falls out from time to time? With my last downsizing I donated a large oil and grease chart for a 1905 Reo Motor Car that I matted and framed like it was fine art for one of my husband’s birthdays and the car museum was happy to get it. It’s hanging in their research library where people who are restoring antique cars come to play. Sometimes giving something away feels great.

My house cleaner is coming today and I’ll go to my last book club tomorrow followed by a lunch date on Saturday with a very old friend, so I can almost promise, positively (well maybe) that the 'D' word won’t come up in my next post or two. But be forewarned, my husband didn’t nickname me "One Track Jean" for nothing. ©

Posted by Misadventures of Widowhood at 12:08 AM