I Can See Clearly…to my Mini Meltdown 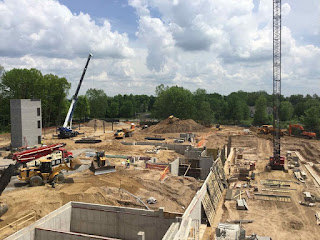 I have a one story house with twenty-six windows plus two glass doors and there is one place I can stand and see out all four sides---east, west, north and south. I love my windows but over the years they have gotten drafter which isn’t so nice in the winter. Heavy drapery---which I hate---would help but I don’t have any drapes or curtains at all, just mini blinds in three rooms and in the public parts of the house I have pull-down shades that you can see out but no one can see in. A wonderful invention with simple lines that makes me happy. Keeping that many windows clean is something I haven’t done on the outsides by myself in many years. I’ve barely kept up with the insides.

That's the windup to The Window Project that took place last week. I knew my cleaning girl’s long-time boyfriend works for a commercial window cleaning company (one of his two jobs) and she and I got to talking about how dirty my windows were getting. Next thing I know we worked out a deal where she’d do the insides while he does the outsides---off the books of the two company’s where they work. I would have hired them either way but even with them charging me $157 ($23 less than a commercial company did three years ago) they were making more money than going through their employers. Of course, they’re taking a gamble that I won’t let their employers know by accident or on purpose because they could both lose their jobs for taking clients on the side. My windows looked so good when they got finished that I gave them each an extra twenty and told them to get themselves some lunch on their way home. (Actually, the other company 3 years ago also washed the screens and the windowsills for the $180 so money-wise I drew the short stick in this deal but heart-wise I was happy to throw some work at them.)

And of course, I lavished them with praise because if ever there were two kids who need it, it’s them. They rent a car every three months to go visit the daughter they gave up at birth in an open adoption five years ago when they were both in high school. The adopted parents live up state and any extra money they earn goes into their ‘baby trips.' A few years back the adopted parents were screwing them around, trying to cheat them out of their legally binding visitation rights but they have since made peace (through meditation) with the details in the adoption agreement which have always been  four visits a year for x-number of hours each. After their trips she always shows me pictures of the daughter and she’s the spitting image of her birth mom which became an issue for the adopted parents when others started noticing that fact. They were trying to pass Purity off as their cleaning lady, can you believe that! She'd have to clean sinks and toilets while visiting the baby and a couple of times they drove all the way up there and the family wouldn't be at home at the appointed time. I’m going to miss Purity when I move. The independent living unit on the Continuum Care Campus where I’ll be living will be too small and out of the area where it's practical/profitable for the company she works for to keep me as a client.

Speaking of the CCC the photo above is the latest one they’ve sent out since the construction company resumed work after being shut-down because of the pandemic. Their email said in a couple of weeks they’ll have a revised timeline for when it will be move-in ready. But the construction company’s newsletter is showing September of 2021 which, if true, is a real bummer considering the original date was in the spring of 2021. What happens if a second Covid-19 wave shuts them down again? I do not want to list my house and move in the winter! I do not want to keep on living in a house slowing transitioning all its ‘personality’ off to e-Bay and the local auction house. And, yes, I’m sick of selling stuff! I’ve been doing it off and on for 25-30 years. I want this chapter of my life finished. Done. Finito so I can have a fresh start.

Would I have locked into this deal if I'd known it was going to stretch out so long? Probably not but on the other hand, until the pandemic got into the act I was good with the timeline. It's been a two-edged sword but I've needed that sword at my neck to keep me motivated and moving forward. At any point I can get my deposits back and start looking for another location but it took me three years to find this one and when I did, I knew it would be perfect. Being a non-profit means the cost of buying a unit and living there is a third less than comparable places. And none of the other CCCs in the area have a lake and woods and heated sidewalks for taking the dog out in the winters. Other places aren’t located within five minutes of all my doctors, either, or near two shopping malls where I’m more likely to meet up with my family than I do now. I like my current neighborhood. It's more upscale than where I'll be moving, and more suburb than city. It worked for us when my husband was alive and we had in-laws still around. But living with a million people in between me and the other side of town, where I have to drive busy expressways to go see my nieces isn't working for me anymore. Not to mention this house is too big for me and too much to keep up at this point in my life.

I want so many things I can't have right now. I want to be able to walk across the hall to the gym and ride an exercise bike while watching the sun go down over the CCC's lake. I want to be able to walk to their post office and their two restaurants and to help form a new book club and join their quilt club in the older section. I've been dreaming and planning my next chapter for so long I've forgotten how to enjoy the one I'm living in. I want. I want! I WANT! ....Well, aren’t you glad you stopped by to witness my mini-meltdown? It feels like menopause all over again. One minute I'm fine and the next minute I'm freaking out. I need a vacation from myself before I completely unravel. I need to have some fun, to get silly and go to a few summertime festivals or art shows, but they've all been canceled for 2020. First the impeachment hearings, then the pandemic followed by all the social injustices protests. Breathe, Jean, breathe and be thankful the killer hornets haven't materialized. Yet. © 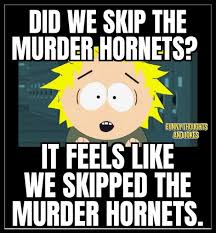