Earlobes and other things that make me feel Old 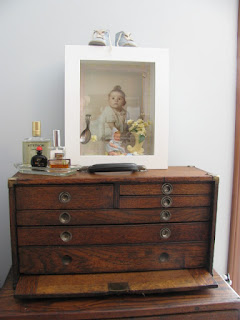 I woke up this morning hating me earlobes. It’s like they grew overnight! All my life I’ve liked my earlobes. They were perfect for post earrings and at one time I owned 225 pair. Nothing expensive but in the year after I got my ears pierced my car automatically turned into a department store’s parking lot on the way home from work and buying ear adornments became an obsession. I was at the pinnacle of my man hunting days and it was the only time in my life when I was a fashionista. Mid-twenties, first full time job and, yes, I was THAT girl who got hung up on my newly discovered femininity---having spent time at a gym in the year before acquiring girl curves that came with a flat tummy and a tight butt. I still have an outfit from that era of my life. Size Skinny Mini for my 5’ foot 7 ½” frame, I wish I had a photo of me wearing those white pants with its red and white stripped, sleeveless tunic top that were both trimmed in black because there is no way on this side of reality that I’ll ever be able to fit back into that outfit. Just looking at it hanging in the closet gives me a jolt of pleasure, though, remembering how kick-ass fine I felt in that outfit. Most of the earrings I bought back in that era were auctioned off in a couple of lots of 25 pair two summers ago but I kept the red and white dangling (sugar-sized) cubes I wore with that outfit.

I have always hated old people’s earlobes, the kind that are like flabby disks. I can even remember as a toddler sitting on someone’s lap and playing with the man’s “elephant ears” and being scolded for saying “Dumbo?” Until yesterday the only part of my body that still looked young, perfect and perky were my earlobes. What happened seemingly overnight? I’d never, ever considering having plastic surgery to bob my ears but if there’s a cream you can use to “tighten them back up” again I’d dig deep into my pocketbook to buy it. Which gives me an idea. I wonder if hemorrhoid cream would work. Models used to use that around their eyes before cosmetic companies started compounding ingredients they could charge hundreds of dollar for to do away with wrinkles. Big sigh here. My earlobes aren’t wrinkled, they’re just droopy like an old man’s balls. And I’ll bet those droopy balls make men feel just as bad as I do about my earlobes.

I’ve been working on downsizing/reorganizing my jewelry this week which is probably why I’ve been eyeballing my earlobes more. The goal was to empty out my dad’s old, oak tool box (shown in the top photo) that I used for a jewelry box for many years and make it all fit in the new gray box below. I also had jewelry in a couple of other places, too, and I wanted it all together. Having my jewelry so accessible in that old box after I move didn’t feel smart and I wanted to ‘shop’ that box around the family to see if anyone wants it before selling it. If none of Dad’s descendants wants it, those old boxes can easily sell for over $400. Surprisingly, my new gray jewelry box, and a plastic one about the same size, held so much jewelry that I had very little left over to donate to Goodwill. I did find 10-12 things that I sold for its gold content. My husband apparently never read the memo about me preferring silver over gold. Time to let go of what I didn't like in the first place.

I should purge more jewelry than I did because I don’t really wear that stuff anymore but like those red and white dangling cubes it makes me smile and remember what it was like to be younger when I cared about getting dressed up. And who knows, once I move to the CCC where they’ll be a long list of events and activities I can take part in I just might take an interest in my appearances again. Wouldn’t that shock my system if I gave up some of my sweats in lieu of real clothes. With a gym right across the hall plus having to walk the dog around the campus maybe I’ll even start losing weight and fit into my Skinny Mini outfit from my clubbing days. Don’t hold your breath on that one unless, God forbid, I pair that exercise with getting cancer. That’s not going to happen, though, I type with a smugness that just invites the universe to smack me down. But seriously, have you ever contemplated how you’re going to die? What will actually get you in the end? I have and it will have something to do with my lungs or over dosing on chronic hives meds or a fall where I can’t get up and die of exposure or dehydration while the dog goes off to his idea of heaven on earth---peeing on every leaf, tree and rock until someone finds Levi wandering around and reads one of his six tags to help get him back home. Ya, even the dog has too much jewelry. Which leads me to ask a question: Why hasn’t it become a fad to pierce our dog and cat’s ears? No one could call it animal cruelty since we do it to ourselves and they do it to farm animals to ID them with a numbers.  © 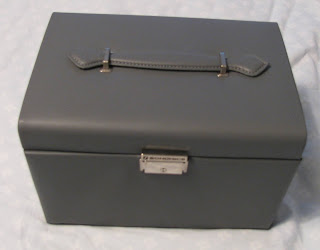 This box is only 10"x7"x7" but between it and the plastic box below it holds all the jewelry laid out in the other photo below that came out of the oak tool box and other places around the house. evidentially, I want it downsized to just one box. 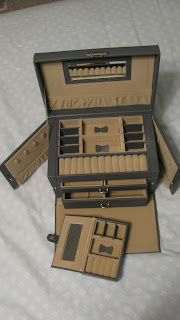 Below is all the jewelry I had in the house that surprisingly fit in the two boxes above. 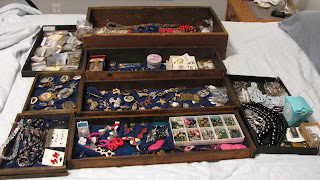 Post Note: Remember the antique bank safe I wrote about in a recent post? I found the combination under one of the linings in my oak jewelry box. Back in 2002 when I wanted to sell that safe I turned heaven and earth over trying to find that combination. I had emptied it out before losing the combination, so I wasn't worried about that aspect but I could have gotten more for the safe if I had a way to open it. A guy who bought it collected those old safes and he knew how to crack them. There isn't a thing in the world that someone doesn't collect.