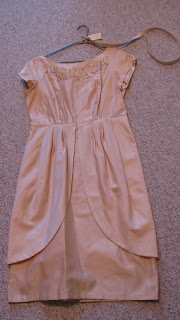 My master closet has always been a walk-in hell-hole of clothing (in three sizes), shoes, Crocs, purses, hats and anything that I want to hide from the world---the volume of which needed to be cut in half before I move. I’ve never enjoyed purging clothing because I change sizes so often that I’m afraid to let go of things that don’t fit. I know, you don’t have to tell me how screwed up that line of thinking is. Life coaches and diet experts say the three-sizes-habit keeps us fatties stuck into the cycle of pushing 15-20 pounds up and down the scales when if we only had one size it would force us to do something about our weight when our clothes get snug with a pound or two gain. Instead, we scale bouncers just grab the next size up in our closets and before we know it, we’re at the top of our fat clothes weight wishing our bodies were like balloons and we could just let some air/fat out until our skinny clothes fit again. Instead, we finally get the wake up call and the D word enters our vocabularies because there’s no way we’re going to buy yet another, 4th set of bigger fat clothes. Oops, I just proved the one size only theory didn’t I. In addition to the three-sizes-of-fat-lady-clothing-curse I had a fair number of “memory-outfits” in my closet before this week’s EPIC PURGE-ATHON took place. Some dating as far as the 1950s, things I’d never wear again but just seeing them made me happy.

One or two years ago I made a meager pass at purged my closet and I did that trick where you take everything out and as you put it back in you hang things up backward so the end of hangers faces outward. As you wear things and they go back in the closet you hang them up the right way. The theory is the next time you purge your closet you purge everything that is still hanging backwards. I still had things hanging backward that haven’t been touched since my last purging but logic and fear were not on my side and I didn’t purge---this time---what the experts say I should have done. My life style will change dramatically after I move and I don’t expect that I’ll be living in sweats all the time like I do now, and all that stuff I’ve been saving for outings outside the house might become my daily wear. The fear comes in because I really hate shopping for clothing, especially when I don’t like most of the newer fabrics in the stores. It’s either too thin or feels like insects crawling on my skin when I wear them.

It took me five afternoons of pulling stuff out of the closet, trying things on and just plain staring into the hell-hole with frequent breaks to jump on the internet. But on Friday I had seven---count them, 1,2,3,4,5,6,7---33 gallon trash bags full of stuff that I dropped off at Goodwill before I could change my mine. One bag was filled with just hangers. If my math is correct what I have left will fit in my future closet, but I will probably downsize in there again before moving. I have too many clothes. One thing I don’t have is too many of is shoes. I’m not a shoe person. Crocs…now that’s another story. I love them but I don’t feel safe wearing them to drive so they end up staying home. In my future home I’ll be able to walk to the post office, the social center for classes and two restaurants on the CC campus so I suspect I’ll be buying more Crocs and they will take over my wardrobe. I even have a bag of Jibbitzs (shoe charms for Crocs) and you can bet your butt I didn’t downsize them out of my life.

So what did go in all those trash bags? It’s easier to catalog what I kept, all of which fits except for 6 outfits on hangers and a small box of clothing marked “slightly too small” (downsized from 3 boxes). Hanging in my closet now are: 3 skirts, 2 pair of dress slacks, 7 pair of winter sweatpants, 15 pair of summer knit pants---10 are black and, ya, I know! no one needs 10 pair of nearly identical black pants---4 pair of crop pants, 2 bathing suits, 9 sweatshirts, 2 vests, 25 short sleeve knit tops, 5 short sleeve blouses, 9 long sleeve blouses, 10 long sleeved light weight knit tops, 10 heavy weight long sleeved knit tops, 7 tee-shirts, 3 sleeveless tops, 7 long sleeve sweaters, 4 short sleeve sweaters, 10 camisoles, 3 summer dress jackets, 6 Pendleton wool classic jackets, 3 dresses (slightly too small), 4 summer sleep sets, 6 winter sleep sets---I was shocked to find all that sleepwear!---2 pair of dress shoes, 12 pair of Crocs, 4 hats and a box of purses that I refuse to count because I really don’t need any of them since I rarely ever changes purses when I go out. The other 3 things in my closet that don’t fit are the only 3 memory outfits that I kept. You don’t have to tell me I still have too many clothes. I will downsize again before I move, then again after I move and I’ve figured out what my life style is going to be.

Photo Notes: The dress at the top was worn in 1964 by my mom for her 25th anniversary party. She wore a gray suit to get married in so this was the closest thing she had to a wedding dress. I posted it on Facebook to just those on my side of the family and two relatives wanted it. The three outfits below are the only "memory outfits" I still have left and with any luck I'll have them until I die. The first outfit is from my man hunting days in the '60s. (The pants are long, I just didn't photograph them off the hanger.) The second dress was what I called my Oscar's Uniform. It's from the '70s when Don and I were dating. There was a nightclub in town that booked fairly well known singers and comedians for a mid-week stopover in between their gigs in Chicago and Detroit. We'd go there almost every week and I always wore that dress. The third dress is hard to see in the photo to really appreciate the cotton fabric. It has a bi-centennial theme and I wore it every weekend the summer of 1976 when Don and I went crazy going to every small town celebration we could find in our state. I call it my hippie dress. © 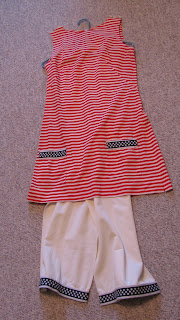 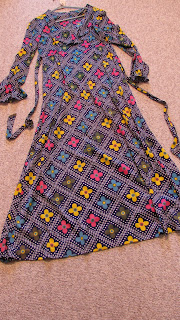 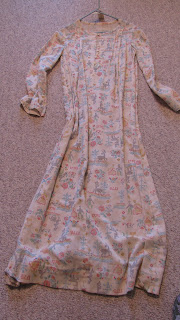 EDIT To Add: I counted the purses and I have 15 and I promised myself they will get downsized again before I move. (I'm burned out on the process now.) Last summer I sold four vintage purses on e-Bay, in the $35 to $50 range and three other purses I still have are likely candidates to go that way but the rest I part with will have to go to Goodwill with a tearful goodbye.

This week I also sold two Pendleton Western cut Wool shirts that were my husband's on Marketplace for $45 each. They were the only memory clothes of his I had left except his Mickey Mouse tie which doesn't take up much room so I'll never let go of that. It was hard to part with those shirts but the guy who bought them was funny with his attempts to bargain the price down---he caved way too easy. That same cut shirt today, in the same plaid sells at Pendleton's website for $160 each so the guy got a good deal and he knew it. He's a brew master at one of the local micro breweries in town and when the bargaining didn't go his way he wanted to barter beer to knock the price down. I don't drink beer so I held firm. But my husband would have loved this silly guy and his unusual job so I was left with a good experience.