The Over Active and Silly Sides of my Brain 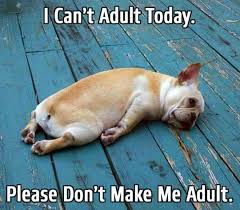 My bladder alarm woke me up at 7:00 AM and, for once, I welcomed it because I had to make a trip to the county’s hazardous waste drop-off station and they’re only open on Fridays from 8 to 11:00. I’m going to miss having that place within a five minute drive from home. It’s located in the same cluster of buildings and roll-off dumpsters where we can drop off cardboard, papers, cans and glass jars, electronics and hazardous waste like paints, printer ink cartridges, back yard chemicals---the list is long of things the county doesn’t want to go in the ground to pollute our water and top soil. It makes me feel good every time drop something off even though, like today, the wait is often long. One of the seven people ahead of me had the entire back end of his pickup truck loaded with paint cans and they all had to be checked because they don’t take latex paint. With latex paint you’re supposed to open the cans, let them dry out or brush the paint on cardboard or pour kitty litter in them and put them in with your normal, weekly trash. I only had a shoe box full of stuff so I helped the line move along faster for those who waited behind me. I should get a gold star for being a frequent---don’t know what right word to use here. I’m not a frequent customer because you don’t have buy anything or pay for the service and I don’t know if ‘frequent dropper-offer’ is even a term.

Ohmygod, my brain hurts from worrying about the details of my life! Where will I go to drop off empty ink cartridges or cardboard after I move to the other end of the county? Will the trash compacter at the far end of the hall be a take-it-all-and-to-hell-with-the-environment kind of thing? Will it sound as loud that compactor on the garage truck that works my street? Back when Levi was alive I worried that the compactor would smell like used kitty litter thus I picked a unit as far away from the compactor as I could go just in case Levi thought it needed his pee mail to improve the kitty puanteur. Honestly, I need a meditation app so I’d have an excuse to sit in the corner and try my best not to think about who dripped that spot of paint on the molding and why did it take me nearly 20 years of living here to find it?

After going to hazardous waste I went a half block away to drop off four boxes to Goodwill, probably the last loads of any substance and value I’ll have to give. I do plan to do another closet purging because my weight, since the Great Closet Purge of the Century back in December of 2020, stayed the same and so the slightly too small clothes I kept back then will have to go bye-bye. I know what will happen. I’ll start using the gym across the hall from my apartment and I’ll wish I had those two boxes of too-small clothes back. I'm not keeping them because, 1) I won't have the room in my new closet and 2) if I were 100% sure that my future includes buying a ticket on the Diet & Exercise Express I’d purge the four tops I have that are too big. They swim on me---an online shopping mistake that wasn’t worth sending back. I need a closet and refrigerator intervention. Food. Food insecurity, food as a cure-all for all that ails me took away my good intentions. Food as my best friend and lately my lover. (Don’t let your mind go kinky here. That ‘lover comment’ was just a throw-away phrase and I have no idea why I wrote it much less thought it. Do your best Freudian interpretation if you’re so inclined, but I will not confirm nor deny that I’ve eaten popsicles in bed.)

Am I in a silly mood today? Why yes I am---almost to the point of being slaphappy. Yes, that’s a real thing. I spent the first thirty years of my life being slaphappy and I’m hoping I’ll enter that state again for the last years of my life. The Merriam-Webster online dictionary says, “Slaphappy hits a lot of the same spots as "punch-drunk": when you suffer a blow to the head, you become confused and silly for a while. The ‘dazed and confused’ sense of ‘slaphappy’ first appeared in English in 1936, and by the following year it was being used to describe those who behave with such abandon it’s as though they’ve had the common sense knocked out of them. A 1937 article in the New York Herald Tribune called Ernest Hemingway, a writer known to have had an adventurous lifestyle, ‘the slaphappy litterateur.’" It’s the “behave with such abandon...." that I’ll be going for, not the “dazed and confused” part. Ya, I want to let my free-spirit out of its cage and quit “adulting” to use a term all the cool kids are using these days to describe,  “the practice of behaving in a way characteristic of a responsible adult, especially the accomplishment of mundane but necessary tasks.” (I love online dictionaries.) Well, I’ve got 891 words of my 1,000 word posting goal accomplished which is close enough. See you next time. ©