My Life on Post-it Notes 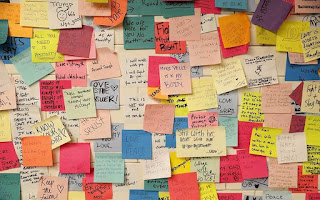 Note: This post was written and scheduled to go live earlier this week but it got bumped back to make room for the computer woes post. I still haven't had time to deal with that fly in my soup and the laptop I'm working on is too old to use as a landing place for my lost photos and documents that should be safety up in a cloud named Carbonite. Hopefully, next week I'll get at it.

Moving on: I'm a huge fan of Post-it Notes. One wall of my computer wardrobe is filled with the colorful little scraps of paper and I have a tin box filled with them as well. Or I should say one wall was filled with them. Everyday I've been working at dismantling bits of my office space inside the wardrobe and taking down my Post-it Notes is part of the process. Everything in the wardrobe is gone, now but the computer itself as it waits for help to move the wardrobe out of the kitchen. By the way, I've tried the Sticky Notes app to keep the clutter at bay and digitalized but I'm a visual person and it just isn't the same.

Over the years I’ve gotten militant about putting quotation marks around stuff I write on Post-it Notes that are sentences I’ve copied out of a book or heard on TV or in a song, so if I ever use that quote I can properly credit the line. I would hate it if someone plagiarized me and I wouldn’t want to accidentally take credit for someone else’s note-worthy thoughts. I often jot down my own phrases or sentences as well so the quotation marks are necessary on other people's words. Once in a great while I’ve found an unquoted phrase on a note and think that it couldn't have come from my brain. So I’ll do a google search to no avail which means, apparently, I do come up with a pleasing string of words from time to time. In past year, though, I’ve started adding “by me” to bits and pieces I think are Post-it Note worthy. I’m old and I need to learn that I don’t have the time to retrace my steps when if I did something thorough the first time I’d save a lot of head scratching and asking myself, Did or didn’t I write this?

A small orange note I’m looking at right now just says, “nuh-uh” while a larger blue note says, “Treasures of Darkness.” I know why I wrote the first one. I often want to use words like that when I write but I have no clue how to spell them or to get Alexa to do it for me. (She hates me and the way I pronounce stuff.) The “Treasures of Darkness” note I had to google to figure out that it was a book title of a book I actually liked and went on to read the entire series minus the one due out in December. Apparently, when I wrote the note I wanted to be sure not to forget about the author’s upcoming book which I did forget and I’ve vowed---yet again---to make the Post-it Notes I jot down a little clearer so I don’t have to waste time googling why I wrote them in the first place. (That last sentence is messy and murky but I assure you, it will makes sense if you read it over again.) And apparently, I like the word ‘apparently’ today because this is the fourth time I’ve used it.

Moving along: On a tiny yellow Post-it Note I wrote, “Fissured Tongue, 5% of Americans.” Yup, you get the door prize if you guessed that I have a fissured tongue which I found out in the middle of the night when I couldn’t sleep and I obsessed that it was a symptom of some dreaded disease I’d picked from reading a book set on another planet. Nope, it’s not but I did start brushing my tongue after that night because those ridges and valleys can harbor a host of yucky stuff. But I’m comforted by the fact that my dentist checks for mouth cancer twice a year. I’m not suggesting that a fissured tongue has anything to do with cancer. It doesn’t. However, I figured if the dentist found anything else worth mentioning---like my fissured tongue---she'd speak up about it.

A lot of my Post-it Notes are things I write down and don’t need to keep past the next day like the hours a certain place might be open or their address. Lately, I’ve accumulated a lot of notes with measurements…moving boxes, furniture, PODS. One note I just threw out had, “High Sierra by HBE” which was the company that made some canvas camping and travel gear that I was going to sell on Facebook Marketplace, but I gave them to Goodwill instead. Apparently---fifth time if your counting---I don’t purge my Post-it Notes often enough because I found a bunch of them about migrating my subscriber list on this blog from Feedburner which is a done deal now. (If you haven't migrated your subscriber list yet, that July 1st deadline is closing in on you.) Another note, a medium sized yellow one, lists foods that are rich in potassium---bananas, spinach, broccoli, sweet potatoes and cucumbers.

And these lines from the website Escape Adulthood I though were Post-it Note worthy fun: "If you think the dictionary should be made into a movie. If you were disappointed to learn that Fifty Shades of Gray was NOT a home decor manual. These are signs that you might have Adultitis."

I tend to see my world as potential ideas for self-published books which comes from spending a life-time documenting where I've been and it occurs to me that if a person were to publish all the Post-it Notes they write in a year, it would tell a story of who that person is. My story would be of a frustrated, bad speller who is easily impressed by lyrical sentences, a woman who has the memory of circus flea. (Circus fleas, I’m assuming, have slightly better memories as other fleas roaming the earth.) Throw in a little germaphobic tendencies and obsessive planning and my Post-it Notes book would write itself.

Currently I torturing myself with a Post-it Note with the words: Maggie’s Song, Chris Stapleton. I heard it for the first time this week and burst out in tears. It’s a country western song about a dog and you know the drill with dogs that are featured in movies and songs---they always die at the end. Maggie’s Song is no different and I only have to look at the pink note to chock up with thoughts of Levi not making it to the finish line of us living on a lake come October. And sometimes in the dead of night I wonder if I will make it, if the stress will kill me before I get there. In the daylight the logical part of my brain takes center stage and I know I'm doing the right thing at the right time in my life, and for the right reasons and everything is going to work out according to plan. If not, I'll alter the plan to suit how it does turn out.

I leave you with another one of my Post-it Notes, a dedication that I found in a not-so-good book by an author new-to-me, T.L.Swan. The first line made me laugh but by the time I finished reading her dedication I'd moved over into the that's-so-cool zone: "I would like to dedicate this book to the alphabet. For those twenty-six letters have changed my life. Within those twenty-six letters I found myself and live my dream. Next time you say the alphabet remember its power. I do very day." ©