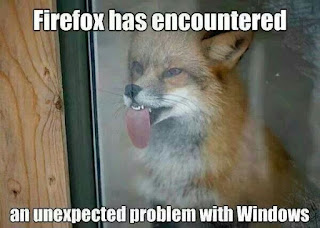 There’s a chain of computer repair places around town and I’ve been using them for twenty years. I woke up a few days ago to find that my preferred internet browser (Firefox) was gone plus all my photos, documents and bookmarks were as well. I packed up the tower to drop it off but when I got to my branch I found a note on the door that said it was permanently closed and to go to one of their others locations. I walked in to the nearest branch and was greeted by someone new-to-me and I barely got the tower set down on the counter when he said, “I’ve got to be honest with you. Your computer is ten years old and is not compatible with the new Microsoft upgrades coming along. You’re probably going to need a new one.”  I’ve got a Carbonite subscription that should have my documents and photos backed up, I told him, and “Their website says I’m still in recovery mode so I probably didn’t know what I was doing when I tried to get my files back. Can you at least look at it?”

Alongside him, facing out to the customers was an 8”x10” piece of cardboard with handwritten letters written with a black marker that said, “God guides all my steps.” It’s probably based on a Bible verse but it annoyed the heck out of me. I don’t know why that’s important to announce it to your customer base. In my perfect world the only ones who would wear their relationship with God on their sleeves would be the men and women ordained by their churches to do so. I know it isn’t fair to judge the guy by that sign but it made me think I needed to hold my hand over my wallet, as my dad used said about certain people. And we can blame my uncle for that. He could have been the inspiration for the movie, Paper Moon. Only my uncle wasn’t a fictional character going across the country selling Bibles door to door and reading the obituaries and claiming the deceased ordered a deluxe Bible before passing away that had a hefty sum of money still due. My uncle really did earn is living traveling across the country, following the good weather to sell Bibles and other religious trinkets.

The most memorable time I remember hearing a phrase like “God guides all my steps” was when Uncle Abe---not his real name but close enough---used it as an excuse for why he shouldn’t have to pay my folks back for a couple of hundred dollars he borrowed from them. Whatever he “invested” the money, it was lost---a land deal, a ponzi scam, the ponies, I have no idea but because God guided his steps Uncle Abe thought my folks should just forgive the debt and pray about it. “Only God knows where the money is now and God doesn’t make mistakes.”

For years my dad tolerated my uncle while he parked his camper in our driveway, using our electricity and water and tying up our phone for the 3-4 days that he would be there because it was the only time my mom would get to see her sister. They ate our food and while my aunt helped cook it they never contributed anything---my dad’s hard work that earning the money to put food on the table was chalked up to thanking God for "providing this wonderful meal.” My uncle’s prayers went on and on and I hated the oily way he looked at me while he was saying them.

There’s a scene in a movie that I think starred Gregory Peck---I’ve tried to find it on the web but couldn’t---where he’s doing a smack-down disguised as a prayer that mocked the idea of giving praise for a meal to God, giving none to the farmer---Peck’s character---who planted and tended the fields, brought in the harvest that his wife then cooked. I saw that movie with my dad once and while he was too kind to ever say anything like that in the presence of his brother-in-law I always thought it would be fun if he did.

The computer guy at the new-to-me shop just called and told me the hard drive is fried. He wants to sell me a rebuilt machine and even though I have a backup at Carbonite he’s not promising he can get my photos and documents back on a new machine. I’m not sure what I’m going to do now but it’s an odd fact of my downsizing process that the day before my computer woes began I was about to take all my hardcopies of my first five years of blogging and the hardcopy of book draft I had to the paper recyclers. Thankfully I didn't. I wish this guy didn’t remind me of my uncle! It would make my decisions on what to do so much easier. ©

P.S. Have I mentioned lately how much I hate working on my laptop? It's old too so I'm crossing my fingers it stays running until I get my computer woes worked out.

P.S. Again. Since so many people (including the computer guy) mention hooking my keyboard and monitor up to my laptop I think I've made a smart decision on what to do. My laptop is old too...11 years and living on borrowed time. I think I will replace THAT now and skip buying a new tower, etc. until after I move and get settle in. That way I'll be forced to give what everyone else seems to prefer doing a fair shot. Who knows maybe it will make a believer out of me and I won't even need to buy a tower later on. More importantly I won't feel forced to make a decision on what tower now just to put it in storage next month. I do need something to put transfer my photos and documents on now and my old laptop isn't going to cut it for that.