Remind me, Who's Bright Idea was it to Move? 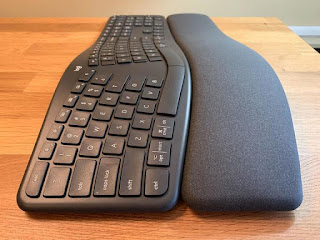 Remember the under the counter light fixture that fell in the middle of the night? I no more than got that one put back up when a few days later the second one fell. Why did all those screws that had been holding those fixtures in place for nearly two decades decide it’s time to give up on their sworen duty to preform?  Inquiring minds want to know. It’s one of the mysteries of life that fits in the category of being an inconvenience but not a disaster so I’m trying to keep these hiccups in prospective. Over 50 houses in the neighborhood were built within two years of one another by the same builder. If I had more time I'd start a support group for people with light fixtures that killed an assortment of countertop appliances.

One of the jobs on my To-Do list to get ready to list the house was to put new numbers on my mailbox. First impressions matter and my numbers were---well, old, faded out and tattered. I took my trusty single-edged razor blade and some Goo-Gone down to the street and managed to remove the old and stubborn numbers. I’ve never learned the fine art of letting the Goo Gone sit and do its job which means I end up making any job that require Goo Gone harder than it needs to be. Someone should learn from my mistakes but apparently it's not going to be me. As I was putting the new numbers on I noticed a wasp going in a finger hole on the back flap of the box, the box where I’d been putting my project supplies. I peeked inside and sure enough they’ve got a nest in there. I’m allergic to bees so I don’t mind telling you I felt like I’d suddenly found myself in a hostage situation. One wrong move and I’d be dead in five minutes. Finally, I catapulted into action and suited myself up with a long-sleeved shirt, hat, gloves and a can of wasp and bee spray but when I pressed the button on the can that is supposed to spray liquid 18 feet it wouldn’t even reach the back of the box. So this simple To-Do job ended with a trip to the store for another can of spray and eventually I’ll have to swing by hazardous waste to drop off the can that didn’t work.

I’m sitting in front of my old laptop and making typing mistakes one right after another. I don’t get why the whole world isn’t rising up against straight-line keyboards and forcing companies to make a laptop with ergonomic keyboard built-in and banishing all the straight-in keyboards to the trash heap of bad ideas. They say there is a learning curve to learning how to use an ergonomic keyboard but I’m suffering the reverse learning curve. After only a few days I’m already feeling my carpal tunnel getting worse.

Since I'll have to go the county’s recycling center for the spray can I decided it will be a good time to go to the next building over to drop off my old Logitech Ergo keyboard along with my defunct computer tower. Once I move and get settled in to my new desk I’ll get another curved keyboard and until then I’ll limp though using the laptop like everyone else seems to do without complaining like I do. My old Ergo keyboard had developed a few skipping and sticky keys and I’d worn the lettering off the keys so badly that I had to buy the key replacement decals. Twice! And isn’t it interesting that they even sell key replacement decals for just about any device on the market. I guess it’s not so interesting, now that I think about it. You can still buy replacement letters and numbers for those old typewriters and cash registers from the early 1900s or at least you could two years ago when I bought a one cent key for a brass cash register that I was getting ready to sell. That little dime-sized disk cost a small fortune.

I’ve been so busy lately working on my To-Do List for getting the house up for sale. The carpet cleaners were here, the A/C maintenance guy, too. The son-I-wish-I-had started power washing the house but only got one side done because he had to leave to take his wife to ER. She was having severe chest pains. I hate that she/they had to spend two days in the hospital but I'm glad that instead of it being heart related it turned out to be steroid related. She’d been taking them for a case of poison ivy. Final answer to the question you’re probably asking: Yes, Tim and I are behind on our Master Plan but that’s okay. Thursday will be the very definition of a Three Ring Circus at my house. He’ll finish up the power washing (just in time for the window cleaners on Monday) while I’m inside talking to my realtor who is coming over to run some numbers by me and to see how close I am to picture taking time. Also on Thursday a woman from the East Coast is picking up my beloved oak roll top desk that she bought on e-Bay. Now, there's a lady who knows how to bring great souvenirs home from vacation. ©

Email ThisBlogThis!Share to TwitterShare to FacebookShare to Pinterest
Labels: computers, To Do Lists